News Larry Bleiberg You Can Finally Look Inside This Stunning D.C. Landmark. But Only for Another 25 Days
Home  >  News   >   5 Simple Shortcuts for a Quick Trip Through Airport Security

5 Simple Shortcuts for a Quick Trip Through Airport Security 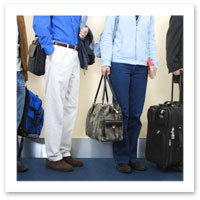 I’m usually the first person to complain that airport security is onerous and burdensome. However, it’s very rare these days that you have to spend more than 15 or 20 minutes in a security line. Frankly, I have to give the much-hated TSA some credit on that front. The lines do move faster now and are generally better staffed. Most of the delays occur when passengers try to take things through security that are prohibited: box cutters, knives, loaded or unloaded firearms, fake bombs (no, they aren’t funny).

Don’t get me wrong. I still think security is too nit-picky and is as much concerned with the theater of safety rather than actual safety. For example, nothing rankles me more than having to take off my shoes to get onto a plane, especially when no other country in the world requires it, including France, where the one and only attempted shoe bomber in the world boarded an American Airlines flight for Miami. But that’s the rule now, and I know that I just have to live with it. If you haven’t flown recently—or if you don’t fly frequently—you may not be aware of what you can do to make the whole process run smoother. There are some simple steps you can take to reduce the amount of hassle you encounter trying to make your flight.

5 Simple Rules to Get Through Airport Security Faster

How often do I put this at the top of my list of simple rules? But here’s another instance where you can ease your trip by doing your homework. Know the up-to-date rules for airport security and be prepared to follow them. Not sure what they are? The TSA has a helpful web site that has some good tips. And, frankly, I’m tired of hearing people say things like “Oh, I must have left my Bowie knife in my bag by mistake” or “You can’t check a gun? When did that change?” or “Why can’t I take my 20 oz. bottle of Pepsi with me?”

Know the rules about liquids and gels (3 oz./100 ml or less is ok…more is not, regardless of how expensive the product). Oh, and pudding is considered a liquid. But what might catch you off-guard are some simple items that are prohibited entirely: gel shoe inserts and snow globes are absolutely prohibited from carry-ons. Who would have guessed that?

Now that everyone wants to be a carry-on traveler, it’s useful to give some thought to how you pack. Put things that security might want to double-check in your personal item; that’s usually a smaller bag, so it’s easier to find something. This might include your ipod, mobile phone, anything else electronic or that has a cord, and your bag of liquids and gels. You’ll still have to take your laptop or netbook out of its case and put that into a separate bin, but if you have all your other things segregated into a single, smaller bag, it will make your life easier.

As much as I think it looks stupid for an adult to wear flip-flops other than at the beach, the practice makes a lot of sense at the airport security line. They’re easy to take off (even though you’ll still have to send them through the x-ray!!!), and you won’t have to sit down to put them back on. Shoes are the big time-consuming obstacle at security for most people, so it does make some sense to wear shoes that are easy to remove and put back on.

Since jackets have to be put through the x-ray machine, it might make more sense to wear a light sweater for the plane instead of a light jacket in case you get cold (if it has a zipper, they’re probably going to ask you to take it off). Pack your jacket or cardigan in your carry-on bag. It makes sense not to wear a belt since you’ll probably have to take it off before going to through the metal detector; instead, pack it in your bag. You can always put it back on later.

4. Empty your pockets before you get to the front of the line

The time to keep $3 worth of nickels in your pocket is not when you are getting ready to board a flight. Nor is it the time to wear seven metal bracelets (not to mention inconvenient and embarrassing piercings). You can simplify your experience by taking off your watch and metal jewelry and taking out your change from your pockets before you go through the security line. I usually put all my metal in a zipped pocket in my carry-on, which I then send through the x-ray machine. Make the process a little safer by putting everything you might want to carry in your pockets in a zip-top baggie and putting that deep in your carry-on, away from thieves.

Keep your wallet safely in your pocket; unless you’re carrying a piece of metal, it won’t set off the detector. If you are unsure (or have an especially fat wallet), put that into the baggie as well and put it way at the bottom of your bag.

You need to show only two things to get through security at the airport: your government-issued photo ID and your boarding pass. If you don’t have both of these things handy, then perhaps you should stand aside before entering the line. Once you reach the metal detector, you only need your boarding pass. They no longer check your ID again at the gate at U.S. airports (except to verify you have a passport before boarding an international flight), though some other countries have secondary security checks at the gate, and in these places you may have to produce your ID again.