News Deanne Revel Now That Disneyland Has Canceled Annual Passes, What's Next? We Answer Your Questions

News Eva Morreale Your Next Tinder Match Could Be in Australia. Here's Why That's a Good Thing
Home  >  News   >   DogVacay.com Sends Fido on Vacation 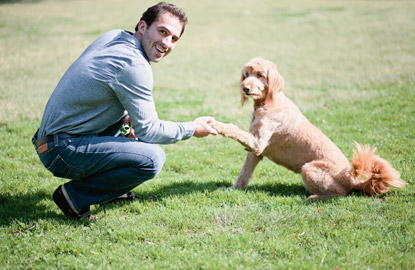 DogVacay.com is a newly launched Santa Monica-based website offering the services of real people in your city as dog-sitters while you go away on vacation. With all the dog-friendly developments – clothing lines, gourmet organic treats that look like cupcakes – it should come as no surprise that dogs are getting their own vacations now, too. Founded by husband and wife team Aaron and Karine Nissim Hirschhorn, DogVacay.com is striving to redefine the experience of dog boarding for both owners and their furry friends.

It’s free to join and browse through hosts in your area. Then, each homeowner sets a price (usually more affordable than kennels) and arrangements are made directly between owner and sitter. Before all this can happen, of course, the couple vets each homeowner with interviews and checking social media sources. And homeowners include information about their homes, their experience with animals (including important certifications), and sizes (and number) of dogs they’ll take on.

The site launched just more than a month ago in Los Angeles and San Francisco and is growing quickly. They have expanded to New York, Chicago, Washington D.C., and beyond, with a focus first on the cities people travel from most frequently and an eye for smaller towns next. They’re even considering expanding overseas down the line.

The company takes a percentage of the host’s fee (between 3 and 10 percent) and pet insurance is included in the overall cost, in case of emergencies. And the dog’s owners are able to request pictures of Fido enjoying his own little holiday. Then, on their return, dog owners can rate the sitter on the website. In fact, homeowners with more positive reviews and a high volume of business have lower percentages taken by the site.

Particularly attached dog owners (or the ones traveling domestically) can take Fido on vacation with them and still use the service for any days when their pup would just be left hanging out in the hotel room. And while all of this sounds like an ideal solution, we were still on the fence.

So we reached out to cofounder Karine who spoke to us about the pre-qualifications of the homeowners, why they’ve turned some away, and how it’s all about bringing animal lovers together.

Perhaps most reassuringly was when she told us that she and her husband use the service when they travel – they browse listings, go on meet-and-greets, and check out pictures of their dogs having fun while they’re gone.

Karine compared the site to Match.com or Orbitz.com for dogs in that "you can sift through all your choices based on reviews like those other sites and make your own decision." And they don’t accept just anyone. The couple and their small team of trainers and advocates have turned away people who aren’t available enough to really care for the dogs and, Karine said, "many of our hosts are already involved with animals in their day to day lives. They’re involved with pet rescue and shelters, they’re passionate about animals."

They also have "Pack Leaders" in major cities to take care of dogs if there is a last-minute cancellation or any kind of emergency. What’s more, a lot of hosts now offer up other basic services to locals like walking, training, and grooming; hosts are also becoming customers themselves.

So the big question is – how much do you trust strangers? Or rather, how much do you trust the strangers that Karine and her husband trust? All dog owners know the emotional tug of leaving their pup in another’s care when they’re away, but does DogVacay’s vetting process, ease, and efficiency outweigh the sketch factor?

The couple told Mashable.com, "We want this to be very different than finding a stranger on Craigslist," but even Airbnb has endured some pretty wild mishaps despite checking into the people they allow on their site.

So tell us in the comments. Would you leave your beloved four-legged friend with a DogVacay.com-approved stranger while you’re off on the road?

Photo credits: Both courtesy of DogVacay.com