Best Hotels of the Pacific Northwest: Washington, Oregon, and Vancouver

The Pacific Northwest is blessed with a staggering natural diversity. Every major city is within an hour of forests, lakes, rivers, mountains, beaches, and just about any other kind of ecological zone you might want to explore.

The tricky part of a trip to the northwest is knowing where to stay. You could spend the night in urban Seattle, then be over in the Cascades for lunch and back by dinner. But should you do that? If you’re planning a trip, consider these picks. We like these places for their uniqueness as well as their proximity to other major attractions. 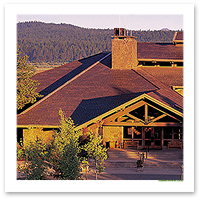 Sunriver, Oregon. A former military base near Bend has transformed into a resort. Golf, great food, luxury rooms, and, above all, the high desert’s sweeping sense of splendid isolation are the main draws here.

Seattle, Washington. The pride of the city’s recent hotel boom, this chic beauty offers plenty of high-tech sensors and gadgets to fiddle with, along with the city’s only state-of-the-art virtual driving range.

What’s nearby: Take the ferry to Vashon Island or Bainbridge Island for the day, or spend some time at Pike Place Market and the Aquarium in downtown Seattle. 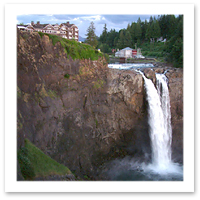 Snoqualmie, Washington. Stare at the Snoqualmie River from a window seat in your room, then contemplate a dinner of sea bass or beef tenderloin while shaking off the sleepiness that has set in after that late-afternoon massage.

What’s nearby: There’s a great hike through trees and over open slopes to the base of the Snoqualmie Falls. If you come in winter, visit the Summit at Snoqualmie, at elevations of up to 5,400 feet, where you can go skiing or snowboarding on any one of the 65 trails.

Heceta Head, Oregon. Occupying a dramatic promontory, this Queen Anne-style B&B has views of the Pacific that inspire many a marriage proposal.

What’s nearby: Heceta Head Lighthouse, the most powerful lighthouse on the Oregon coast, is visible for 21 miles and can be toured for free. The Oregon coast’s most popular tourist attraction, the Sea Lion Caves, are a mile south of the lighthouse. You can watch hundreds of massive sea lions as they lounge around the caves.

Yakima, Washington. A stay here puts you on a plateau in the middle of wine country. The restaurant is one of the region’s best: all the entrées come with an exotic homemade bread of the day.

What’s nearby: Wineries! Lots of them! 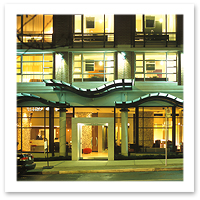 What’s nearby: You can take the Aquabus to Granville Island, where there’s a 50,000-square-foot building that houses small-scale local vendors. There’s plenty else to do, too. If you want to stay closer to the hotel, Yaletown is full of great restaurants and shops.