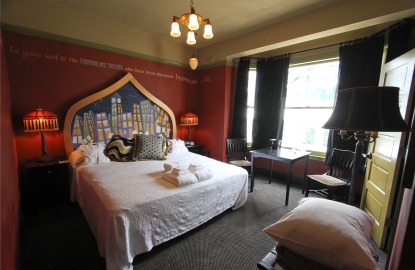 With the hit TV show Portlandia gaining a cult following, the City of Roses has been thrust into the national spotlight. With an ever-growing coffee, beer, and food scene, this Pacific Northwest gem is now known as so much more than just a city with pretty flowers. Read on for our roundup of recently opened establishments in Portland, Oregon, worth checking out on your next visit here.

Perhaps no other city in the U.S. has a coffee scene as intense as Portland’s, not even Seattle with its omnipresent Starbucks. Many coffee shops here take pride in not only serving up a great cup of joe, but also in roasting their own beans. At Spielman Coffee Roasters, owner Rick Spielman sources beans from Mexico, El Salvador, Ethiopia, and Sumatra for his espresso and drip coffee. In addition to roasting his own coffee beans, Spielman boils and bakes his own bagels: Local paper Willamette Week recently rated the plain bagel as Portland’s best, and customers haven’t stopped coming in droves since.

If coffee isn’t your cup of tea, check out Behind the Museum Café, set a block away from the Portland Art Museum. This Japanese-style teahouse offers various teas, Japanese beer and sake, and savory rice balls. The sweet pastries are all literally made by hand courtesy of owner Tomoe Horibuchi; you’ll find no electric mixers in use here. Grab a deliciously dense matcha walnut brownie and pair it with a green tea latte for the perfect snack, or attend a traditional tea ceremony (held between 2pm and 5pm, Thursday to Monday). Don’t forget to browse the Japanese-inspired ceramics and trinkets lining the back wall; all are created by local artists and available for sale.

Asian cuisine seems to be the current palate-pleaser of choice in Portland, with newcomers Smallwares and Luc Lac joining the food scene in recent months. With its contemporary red-accented interior, Johanna Ware’s Smallwares looks like a restaurant imported straight from the streets of Manhattan. Ware, an alum of David Chang’s famed Momofuku Ssam Bar and Noodle Bar in NYC, touts her barely one-month-old restaurant as "inauthentic Asian." Everything here is about fusion, with dishes prominently featuring Asian ingredients such as kimchi, sriracha mayo, and daikon, and cocktails that include plum wine, szechuan honey, and Thai chili. A memorable dish offered as a special is the steak and eggs rice bowl, a fusion take on the Korean bibimbap, with hanger steak, scrambled eggs, miso-kimchi sauce, pickled mushrooms, and onions, scallions, and chives served over a bed of steamed white rice.

When downtown eatery Pho PDX closed its doors late last year, its owners didn’t go very far. In fact, they moved next door and opened Luc Lac, a restaurant with a casual lounge atmosphere, a full bar, and a more extensive food menu. Naturally, with Luc Lac being a reincarnation of Pho PDX, several varieties of the steamy Vietnamese noodle soup are offered, served with generous portions of meat. Noodles, rice plates, and banh mis round out the menu. Don’t miss Luc Lac’s happy hour (from 4pm to 7pm, Monday through Saturday), featuring a wide variety of rolls, skewers, and other small plates for just $2, and draft beers and house wines for $4.

Food carts in Portland are nothing to scoff at: From deep-fried pies to Fijian curries to Norwegian flatbread wraps, nearly every kind of craving can be quelled at the many food cart "pods" sprinkled throughout the city. Cart owners are proud of their restaurant-quality creations, and Portlanders are more than happy to support these small local businesses.

For a taste of Alaskan sockeye salmon, head to Salmon Fusion (503-719-9018) in downtown Portland, which opened in January. Owner Roger Mumm helped catch 240,000 pounds of salmon in Alaska’s Ugashik River last summer while working for a fishery. He reserved 7,000 pounds of it specifically for Salmon Fusion, for which he smokes his salmon weekly. The hearty salmon chowder wins the popularity contest here, followed by a salmon pot pie served with saffron rice and an irresistibly sweet Hawaiian slaw complete with pineapple chunks. Other options star smoked salmon in pita wraps, sliders, and tacos.

In the southeast neighborhood of Sellwood, friends Ben Alley and Scott Ettinger are giving customers a taste of their childhood at Okie Rogie (503-964-4109, @OkieRogie). Alley and Ettinger grew up together in Pennsylvania’s Lehigh Valley, in a town with a high Polish population. Perogies were a favorite comfort food of theirs while growing up, and thus, Okie Rogie Perogies was born in January. Plans are underway to expand the menu, but currently, these potato-filled dumplings come boiled or fried in three vegetarian and three meat varieties. Try the jalapeno with sharp cheddar cheese and the chicken Alfredo with broccoli. The bite-size dumplings are great as a snack, or as part of a meal with a cup of borscht.

2011 was a big year for Kim Boyce: Not only did she win a James Beard Award for her cookbook Good to the Grain, but she also opened Bakeshop, her first retail outlet, on Christmas Eve. Boyce, a former pastry chef at Spago and Campanile in Los Angeles, puts a healthy spin on baked goods by using whole-grain flours. Find her best-selling figgy buckwheat scones here, as well as Boyce’s current personal favorite: strawberry barley scones. Bakeshop also sells savory sandwiches, tarts, and muffins. One treat not to miss is the addictive Sweet & Salty cookie filled with chili flake-roasted pumpkin seeds, plump golden and dark raisins, and huge milk chocolate chunks.

Meanwhile, joining the company of Voodoo Doughnut and Stumptown Coffee in downtown Portland is Blue Collar Baking Company. The bakery is a tribute and throwback to owner/chef Warren Becker’s blue collar roots while growing up in 1960s Milwaukee. Vintage lunch pails and thermoses adorn this spacious store, and his treats feature industrial names, such as the cranberry, white chocolate, and orange zest Lunch Whistle cookie and the chocolate-and-walnut Working Class Stiff bar. However, Becker’s specialty is Bundt cakes, a dessert he loves and associates with his childhood. Find them here in all shapes and sizes, from the bite-size Bundtlets, to the larger Mt. Hood chocolate and sour cream Bundt cake.

A city can never have too many microbreweries, and Portland is proof of that. Commons Brewery is the latest brewery to open in Portland. Born out of owner Mike Wright’s garage, Commons produces European-style brews and offers tastings every Friday and Saturday night; a sample tray of any four beers costs $7. Commons has eight taps available, with beers like the refreshing Urban Farmhouse Ale, light and fruity Saison de Pamplemousse, and dark and malty Sticke.

In northwest Portland, Caps & Corks is a two-month-old pseudo-liquor store, bar, and restaurant, all in one. Imbibers can indulge in seven rotating taps or choose from more than 400 bottles of beer to enjoy inside or to go. About 20 varieties of whiskey are also available. The grub exceeds typical bar food expectations, with items such as bourbon fried chicken, tater tot casserole with beer-braised beef, and Prosecco-poached pears.

For those who prefer sipping on something stronger, head to hip Mississippi Avenue in north Portland, where Interurban mixes up plenty of hard cocktails, all for less than $9. Fashioning itself as a "modern American saloon," Interurban also offers pork loin and chuck roast from its spit rotisserie. Happy hour here runs from 4pm to 5:30pm on weekdays and from 10pm until close on Sundays; wine and cocktails are only $5 each, while a mug of beer costs no more than $4.

Historic hotel chain/Pacific Northwest microbrewers McMenamins is closing in on the first anniversary of its Crystal Hotel, which held its grand opening last May. The hotel, located across the street from the Crystal Ballroom, serves as a tribute to this nearly 100-year-old live music mainstay. The Crystal’s 51 colorful and eclectic rooms are rock-and-roll-inspired in decor, based on songs and concerts held at the Ballroom. A restaurant and a live music venue are also located in the building. Nightly rates range from $85 to $165, and include pool access.

Thinking of a trip to Portland?

For up-to-the-minute hotel and restaurant recommendations, plus the best planning advice, check out our online Portland Travel Guide.