It looks like temps will be taking a nose dive over the next few days—and snow is predicted for Saturday—but don’t let fall’s fast departure spoil your fun. From festive Halloween happenings to an action-packed roller derby, here are five reasons to bundle up and get out there. 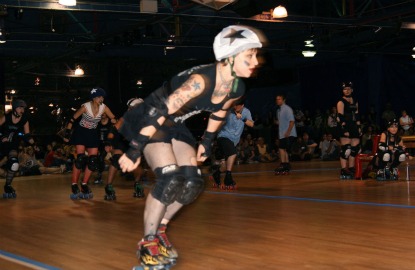 See who goes home with the "golden skate" at the year’s Gotham Girls Roller Derby Championship, with the two-time defending league champion Bronx Gridlock up against the Brooklyn Bombshells, first-timers for the title.

Get a Dose of Performing Arts

The second annual White Light Festival at Lincoln Center has a lineup that features a screening of Carl Dreyer’s silent film classic The Passion of Joan of Arc—with a new score from members of Portishead—as well as a take-off on Shakespeare’s Othello from Toni Morrison and Peter Sellars.

It’s bound to be another packed event at Eataly with Identita, two days of classes given by 12-all-star chefs—including Mario Batali—and seven winemakers. Plus, for those serious foodies, there’s a six-course dinner prepared by the masters themselves.

Fright-night lovers will want to hit the 39th annual Greenwich Village Halloween Parade. This is your chance dress up and march along Sixth Avenue with 50,000-plus revelers—or watch the show from the sidelines.

See New Galleries at the Met

Be among the first to catch a glimpse of the Metropolitan Museum of Art’s brand new home for its Islamic art collection—much of which has been in storage for the past several years—when 15 remodeled, expanded galleries are unveiled.