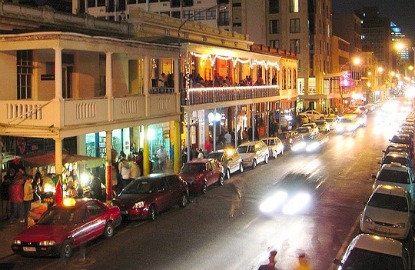 It’s summer in South Africa’s city by the sea. That means picnics on sugar-white beaches, jaunts to wine country, and day hikes up Table Mountain, which was named to the list of the new seven natural wonders of the world in 2011. But Cape Town is more than a nature-lover’s paradise. In recent years, the city’s hotel, restaurant, and arts scenes have heated up with new openings and innovative offerings that rival those of the most cutting-edge Northern Hemisphere cities—but at a relative discount. Here’s the inside scoop on Cape Town’s buzziest boutique hotels, hottest restaurants, and most happening art shows in high season, which runs through April.

The casual chic Boutique Manolo hotel is nestled up on a hillside overlooking Table Mountain. Four minimalist suites and a penthouse all enjoy spectacular views of the mountain and city, plus a pool and two intimate lounges. But the best reason to stay here is the warm African hospitality. Rooms from $295/night.

After a recent renovation, the Three Boutique Hotel exudes an elegant, modern vibe. Housed in a 275-year-old colonial manor that’s a national heritage site, the hotel’s 15 rooms feature muted grays and whites with granite and glass accents. A roof deck with views of Table Mountain makes a stunning setting for sundowner cocktails. Rooms from $120/night.

The city’s best budget boutique is Daddy Long Legs in central Cape Town, on trendy Long Street, with its buzzy restaurants, bars, and art galleries. The hotel is run as an "interactive art exhibition" featuring 13 rooms, each decorated by a local artist. Our favorite rooms are the Afro-chic "Freshly Ground," and "Open" with its endless sunsets. Rooms from $122/night.

An elegant space overlooking lush gardens, the Greenhouse is internationally celebrated as one of South Africa’s top restaurants. The fanciful tasting menus feature unusual preparations like beet and goat cheese "lollipops" and nasturtium mousse in "edible dirt." These starters pave the way for the spectacular main events that may leave you feeling like you jumped down the rabbit hole, but in the most tasteful way.

For something more industrial-chic, head to the just-opened restaurant The Test Kitchen to enjoy the bold yet exacting creations of award-winning chef Luke Dale-Roberts. Dishes like trout tartare with green apple and creamy miso, and squares of chocolate-covered foie gras will shock the taste buds into happy submission. Tantalizing cocktails like the pineapple and vanilla cosmopolitan seal the deal.

Can’t cope with all that duck fat? Cape Town’s new branch of Nobuyuki Matsuhisa’s international chain Nobu has delighted locals and visitors alike with its Japanese fusion cuisine. This location offers all the panache and perfection associated with this global superstar at half the price. And dishes like the yellowtail sashimi with mustard miso sauce will delight the senses without clogging the arteries.

Swaziland’s renowned modern artist Nandipha Mntambo has returned to Cape Town this season with a must-see exhibit at the Michael Stevenson gallery. Using cowhide and cow hair, Mntambo’s sculptures and drawings question our perceptions of the insides and outsides of bodies and spaces in startling and primal ways.

Meanwhile, the Iziko South African National Gallery hosts the first-ever solo exhibit of Ghanaian photojournalist James Barnor, who captured the birth of post-colonial Africa in the 1950s with his images for news organizations before becoming a fashion photographer in London.

Also at the Iziko, for those wondering how much has really changed in the years since apartheid, an exhibit by photographer Struan Robertson is a picture on South Africa’s rural poverty during the height of apartheid. These sober images are arresting while also evocative of the everyday battles by rural people to survive and triumph.