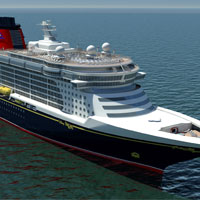 Disney Cruise Line has announced the launch of its third vessel, the Disney Dream, which sails for the Bahamas from Port Canaveral, FL, for the first time on January 26, 2011. Seem like a long way off? Trust us, this is a trip worth waiting for, so you might just want to mark your calendars and book now. The folks at Disney are never at a loss for creativity and innovation, and they’ve applied plenty of both to the Dream.

Staterooms with an exterior view are so last century. Aboard the Dream, interior rooms have an HD screen in the shape of a porthole with real-time 24/7 feeds from cameras outside the ship. Whether you’re starboard or port, you see what guests with actual windows see—and more. Every now and then Mickey might snorkel by or Peach the starfish from Finding Nemo might plaster herself up against the “glass” and wink at you. How cool is that?

Imagine standing next to the ship’s aft funnel, 46 feet up at Deck 16, looking out to sea. Now imagine slipping onto an inflatable raft poised at the start of a big clear acrylic tube through which a stream of water flows. You push off and plunge down through this man-made flume, above the ship and then out beside it some 13 feet, with the ocean 150 feet directly below. Water jets swoosh you through to some rapids before you whoosh to a stop—some 765 feet or two-and-a-half football fields along—at about Deck 12. You’ve just taken your first ride on the world’s first shipboard water coaster, called (what else?) the Aqua Duck.

The Dream has lots of other wonders—as if virtual portholes and an onboard water coaster weren’t enough. Indeed, there’s something for one and all. Younger children can play among characters from Toy Story in the Oceaneer Club or go adventuring on digital seas in the Oceaneer Lab. Teens and tweens can chill out in their own zones with video games, social media, and wading pools. Adults can escape to the Senses Spa or the Quiet Cove Pool, have dinner at the northern Italian Palo restaurant, and head to the night-time area known as the District for drinks at the Skyline Bar (where the skylines actually change).

For a virtual tour of the Dream and information on itineraries and pricing or to book a trip visit Disney’s Cruise site.