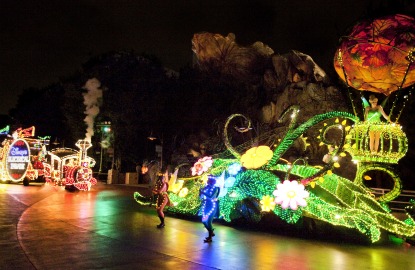 Contrary to popular belief, Walt Disney World doesn’t close down entirely at night. In fact, many of the park’s most entertaining shows happen in the evening, and some activities and attractions are best visited after dusk, when crowds thin out. These are the top 5 nighttime activities to partake in.

Located at Downtown Disney, the Cirque du Soleil presentation La Nouba is designed to dazzle both adults and children. This is hardly your typical circus—expect over-the-top bicycle stunts, aerialists, and synchronized gymnastics acts that will have you asking "How did they do that?" for days. Kids especially love the four young girls from China who perform tricks with diablos, juggling props composed a spool and a string between two sticks. La Nobua offers two performances a night, at 6 pm and 9 pm, Tuesday-Saturday. Tickets range between $75-$140 for adults and $60-$115 for children ages 3 to 9 years old based on the location of your seats and the time of year, but discounts are often available.

Three of the four major theme parks—Magic Kingdom, Epcot, and Disney’s Hollywood Studios—offer downright spectacular closing shows. The Magic Kingdom is currently presenting the Main Street Electrical Parade as well as Wishes, a fifteen minute firework show that includes Tinker Bell flying over the crowd. While Wishes is presented every evening at park close, the Main Street Electrical Parade only occurs on select nights. Check park hours to determine which nights the parade is running and to check times for the fireworks. Epcot’s night time show, Illuminations, is at 9 pm every night. (One caveat for families with young children, the Illuminations fireworks can be very loud.) Disney’s Hollywood Studios hosts Fantasmic, a 25-minute extravaganza with fireworks, water based screens, fire effects, and every character you can image. Fantasmic is only offered on select nights, and times vary so check schedules in advance.

3. Evenings at the Water Parks

Both water parks, Blizzard Beach and Typhoon Lagoon, offer extended hours in the summer, and can be significantly less crowded after the sun goes down. (Guests staying in Disney hotels may have even longer on nights when Extra Magic Hours are offered. Though some slides are closed, the pool is always open.) Consider spending the morning at a theme park and then heading to one of the water parks around 3 pm.

Disney World is home to several mini-golf courses, all whimsically themed. Fantasia Gardens, located near Disney’s Boardwalk Inn, has a traditional 18-hole miniature golf course based on the movie Fantasia. Here your golf ball will play musical notes, encounter Chernabog, and set off fountains. There’s also Fantasia Fairway, which is literally a miniature golf course, shrunk down to putting size. But be warned—the Fairway is tricky and only suitable for experienced golfers! Winter Summerland, located by Disney’s Blizzard Beach, is themed around Santa—the "Summer" course shows what he and the elves do on vacation while the "Winter" course is all about Christmas. Cost is $12 for adults and $10 for children, and the courses are open 10 am to 11 pm. But they’re especially fun at night.

For larger groups, consider a fireworks cruise, which will give you a unique view of either Wishes at the Magic Kingdom or Illuminations at Epcot. These cruises can be custom built to fit your needs—anything from a birthday banner to a Champagne toast can be added. Families with younger children can check out the Pirate & Pals Fireworks Voyage. In addition to fireworks viewing, this cruise includes snacks and several meet and greets with characters. Prices are $53.99 for adults and $30.99 for children ages 3 to 9 years old.