Discovering All of Greece’s Classical Sites 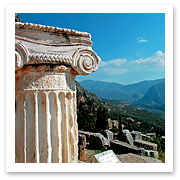 Lovers of art, antiquity, and mythology journey to Greece to see its great archaeological sites. Here, at Delphi, Olympia, and Epidauros, the gods of Olympus were revered, Euripides’ plays were first presented, and some of the greatest temples the world has ever seen were built. Take this tour and you’ll learn that you don’t need to be a historian to feel close to ancient Greece.

Days 1-2: Athens
Begin at the beginning—the Acropolis plateau—where you can explore the greatest temple of Periclean Greece, the Parthenon, while drinking in heart-stopping views over the modern metropolis. After touring the ancient Agora, the Monument of Lysikrates, and the Odeon of Herod Atticus, finish up at the National Archaeological Museum (check opening hours).

Day 3: Sounion
Sun and sand, art, and antiquity lie southeast of Athens in Sounion. Here, the spectacular Temple of Poseidon sits atop a cliff 195 feet over the Saronic Gulf. 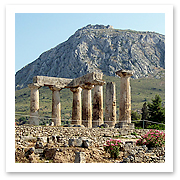 Pay your respects to the god of the sea at the beach directly below or enjoy the coves of the Apollo Coast as you head back west to the seaside resort of Vouliagmeni for an overnight.

Day 4: Eleusis & Corinth
Heading west of Athens, make a stop at Eleusis, home of the Sanctuary of Demeter and the haunted grotto of Hades, god of the Underworld. Past the Isthmus of Corinth—gateway to the Peloponnese—Ancient Corinth and its sublime Temple of Apollo beckon (photo, right). Head south to the coast and Nafplion; en route, stop at a roadside stand for some tasty Nemean wine.

Days 5-6: Nafplion, Tiryns, Mycenae, Epidauros
Set up base in Nafplion (photo, right), a stage set of Venetian fortresses, Greek churches, and neoclassical mansions. Next, explore the mysteries of forgotten civilizations in nearby Tiryns, Mycenae, and Epidauros. North is Tiryns, where Bronze Age ramparts bear witness to Homer’s “well-girt city.” 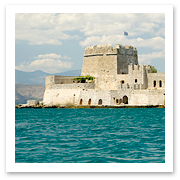 Farther north is Agamemnon’s blood-soaked realm, the royal citadel of Mycenae, destroyed in 468 BC. Then take a day trip east to the famous ancient Theater at Epidauros, where a summer drama festival still presents the great tragedies of Euripides.

Days 7-8: Olympic & Bassae
After your third overnight in Nafplion, head west via Argos (with helpful train connections) or Tripoli (by car on the E65) to Olympia—holiest site of the ancient Greek religion, home to the Sanctuary of Zeus, and birthplace of the Olympics. Walk through the olive groves of the sacred precinct; then get acquainted with Praxiteles’ Hermes in the museum. Overnight here and then make a trip south to the remote Temple of Apollo at Bassae.

Day 9: Delphi
Head north through verdant forests of the Elis region to Patras or nearby Rion for the ferry or bridge across the Corinthian Gulf; travel east along the coast and overnight in chic Galaxidi, with its elegant stone seafarers’ mansions. The final day, set off to discover Delphi, whose noble dust and ancient ruins are theatrically set amid cliffs (photo, top). Despite the tour buses, it is still possible to imagine the power of the most famous oracle of antiquity. From here, head back to Athens.