Guatemala is often acclaimed for its cultural richness and biodiversity, but it is rarely recognized for its cuisine. Mirciny Moliviatis and Eduardo González—chefs and television personalities—are looking to change that with El Sabor di mi Tierra (The Flavor of My Land). The Guatemalan travel and cooking show has introduced many natives to the culinary diversity in their own country. 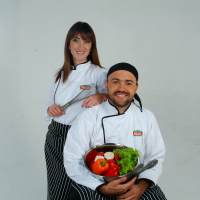 The show, currently only available locally, is dedicated to preserving the culinary traditions of celebrations and festivals, many of which are passed from one generation to the next by oral tradition. In Guatemala, "eating is about tradition and religion, it has multiple meanings," says Moliviatis.

Chiles rellenos
Unlike their Mexican equivalents, Guatemalan stuffed peppers generally aren’t made with the spicy poblano chile but with sweet bell peppers, filled with a mixture of chopped beef and vegetables. The peppers are then battered in egg and deep-fried, and often bathed in a mild tomato sauce.

Fiambre
Fiambre is a Guatemalan chef salad with up to fifty ingredients—cold cuts, sausage, cheese, carrots, corn, cabbage, cauliflower, beans, radishes, lettuce, boiled eggs, olives, and dozens of other vegetables and garnishes—all arranged on a festive platter and covered in a vinaigrette dressing. 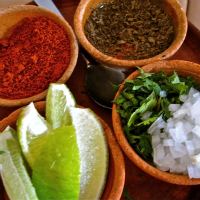 Hilachas
The shredded meat in this mildly spicy beef stew is bathed in a sauce of tomatoes, tomatillos, and chiles, with potatoes and carrots generally included as well.

Jocón
A specialty of Antigua, jocón is a mild, slightly acidic green sauce prepared from tomatillos, cilantro, sesame, and pumpkin seeds, with soaked, ground tortillas used as a thickener. It’s usually served over chicken, though pork or turkey is sometimes substituted.

Kaq-ik
Hailing from the area of Alta Verapaz, kaq-ik (seen with a variety of spellings, or known by its Spanish equivalent, chunto de pavo), is a savory turkey broth served with hunks of meat, often including a drumstick protruding Flintstone-like from the rim of the bowl. The suffix-Iik indicates that a dish includes chile peppers, but kaq-ik isn’t particularly picante. Besides the chiles, the broth is flavored with tomatoes, tomatillos, onions, garlic, mint, cilantro, and other spices. Kaq-ik is generally served with white rice or occasionally with a plate of tamales. 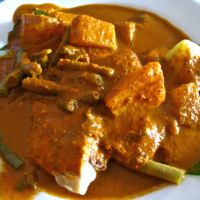 Pepián
Also traditional around Antigua, Guatemalan pepián is a hearty stew. Pieces of chicken, potatoes, green beans, and carrots are served in a dense sauce of tomatoes, chiles, pumpkin seeds, sesame seeds, and other ingredients. Like Mexican mole, pepián comes in several varieties, ranging from colorado ("red") to negro ("black").

Pollo con loroco
From the eastern department of Jalapa, pollo con loroco is a stew, in this case chicken and vegetables served in a cream sauce seasoned with the flower that gives the dish its name. Native to central America and called quilite ("edible herb") in Mayan, loroco is a vine that produces flowers prized for their unique, pungent flavor.

Suban-ik
Originating around the town of San Martín Jilotepeque in the department of Chimaltenango, saban-ik is a mixture of chicken and pork (and sometimes beef), served in a delicious, complex tomato sauce seasoned with several different chiles, along with sweet peppers, tomatillos, and other condiments. Despite all the chiles, suban-ik, like kak-iq, isn’t likely to trouble a delicate palate. 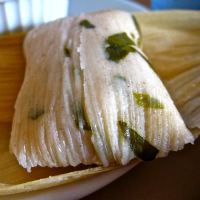 Tamales
Guatemalan tamales come in all shapes and sizes, including some you won’t find anywhere else. They may be sweet or savory, stuffed with pork or chicken, flavored with seasonings such as loroco (a type of flower) or chipilín (an herb), and generally steamed in a banana leaf. Chuchitos ("little puppies") are small corn tamales filled with pork and wrapped in a cornhusk.

Tapado
Its name meaning "covered," tapado is a kind of tropical bouillabaisse from Guatemala’s Caribbean coast. A specialty of the region’s Garífuna population, descendants of African slaves, the dish is a seafood stew made with coconut milk, sweet peppers, and plantains. Other ingredients vary, but often include squid, crab, shrimp, snails, red snapper, and sea bass.