News Apeksha Bhateja What Are the Chances You'll Get Monkeypox at a Hotel?
NewsAsk a Disney Expert: Dining at Disney 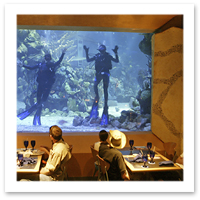 For Fodor’s recent “Ask a Disney Expert” Contest, travelers submitted their toughest Disney questions for Kim Wright Wiley, author of Walt Disney World with Kids 2009. Kim will answer questions from the contest’s 8 winners, along with several others, in a four-part series on Fodors.com. Winners will receive a complimentary copy of the guide. Thank you to everyone who sent a question in!

View all of Kim’s tips: Where to Stay | Touring Tips | On a Budget

There’s no shortage of delicious finds at Disney; knowing which restaurants or meal plan suits your family can be a challenge though. Kim weighs in this week with her tips for navigating meal time at Disney.

“My family is traveling to Disney World in September. We’ve never been there before and we are getting the Deluxe Meal Plan. I am wondering how we decide where to eat and do I really have to make dinner reservations now?” — submitted by BethL3 (winner)

Kim’s Answer
September is less crowded than many times of the year but frankly, I’d still go ahead and make the majority of my reservations before I left home. The immense and to some degree unexpected popularity of the Dining Plan system means that families without reservations often end up being frozen out of the most popular restaurant at peak dining times. So how do you know where you want to eat? First, visit www.disneyworld.com to check theme park hours during the time you’ll be in Orlando and make an itinerary indicating which park you’ll be visiting on which day. After you’ve decide that—for example—you’ll be staying late in Epcot on Wednesday in order to see the 9pm showing of IllumiNations, you can book a 7 pm dinner reservation. (And if your plans remain loose, there’s nothing to stop you from double-booking restaurants and then canceling as your plans firm up.)

In order to decide which of the dozens of Epcot restaurants is best for your family, consult a guide and scan the restaurant descriptions. By booking the majority of your meals in advance you’ve made a big start in setting an itinerary and this will help you make the best use of your time—as well as assuring that your Deluxe Dining Plan gets you into the restaurants you really want.

“I am taking my 3 year-old granddaughter and my daughter to WDW the end of August 2008 on a package deal with meals. Where should we sit in order to get her the best view and best chance of getting visited by her dream princesses?” — submitted by jet2008 (winner)

Kim’s Answer
The character meals are great precisely because all the characters go from table to table and children have plenty of time to get a hug and an autograph and grandparents get plenty of time to take a cute picture. So one seat really isn’t any better than another. Character dining is an excellent alternative to the somewhat rushed free character appearances throughout the park which—while having the definite advantage of being free—can sometimes become a little overwhelming for kids, especially ones as young as your granddaughter.

Since you said she likes princesses, I assume you have booked one of the princess character meals (which are extremely popular and MUST be reserved in advance) and, if so, all the princesses who are present will eventually come by your table for a visit. The Magic Kingdom breakfast is the more popular of the two, largely because it’s held in the gorgeous setting of Cinderella Castle, but the Epcot breakfast, which is held in the Norway Pavilion, actually has more princesses. If she has a special favorite, ask who’ll be on hand when you book your reservations. Not all the characters are at all the breakfasts so you don’t want to promise something you can’t deliver. Finally, does she have a princess dress, tiara, wand, etc? Now’s the time to pull them out. Little girls really dress up for the character meals!

“What’s the best place to have a sit down dinner that will please a toddler as well as a teenager?” — submitted by arego143

Kim’s Answer
In my reader mail there is a greater discrepancy in restaurant ratings than in any other categories. It seems that people are in agreement about what makes a hotel room comfortable or a ride scary but they can’t come to any consensus on what’s a good place to eat. If fun is the aim, consider a restaurant with a type of built-in entertainment like the campy 50’s Prime Time Café at Hollywood Studios either Marrakesh at Epcot, which has belly dancers or the Coral Reef, also at Epcot, where one wall of the restaurant is the Living Seas aquarium.

If there are picky eaters in the party go for a place that serves predictable classics like Mama Melrose’s at Hollywood Studios, Rainforest Café at the Animal Kingdom, the Garden Grill Restaurant at Epcot or Tony’s Town Square Restaurant in the Magic Kingdom. No matter what the age of your kids, it’s worth taking the time to skim through your options in a travel guide so that there are no big surprises in terms of cuisine or cost.

“I want to sign my 6-year-old up for either the tea party with Alice or the Pirate treasure hunt, both for kids only, and have told her about both of them, but she is hesitant to go without me. I know they fill up, so if I enroll her in one of those, and we get there and she just won’t go, will they refund my money or have I lost out?” — submitted by koobidogg

Kim’s Answer
They’ll usually refund your money, but let me make a couple of suggestions to lessen the trauma. The tea party is probably a better choice because the kids stay in one room rather than moving from place to place as they do in the pirate hunt and you can reassure her by sitting right outside the restaurant in the Grand Floridian lobby while she decorates cookies and plays party games. That may be less intimidating than sailing the bounding main.

Also consider the Family Magic Tour at the Magic Kingdom. It’s a scavenger hunt that the whole family can enjoy together and it has a Peter Pan Theme. So if she wants the pirate experience she can have it—and also still have Mom at her side.

“Can you give me a logical sequence of rides with snack/food stops to coincide with the restaurants’ free scheduled character appearances?” — submitted by lincasanova

Kim’s Answer
The locations and the times the characters appear are constantly changing—they make more appearances during summers and holidays when the parks run longer hours. When you enter each part in the morning, pick up a daily entertainment schedule when you get your park map. It will note all character greeting times and locations. Getting there ten minutes before the characters are due to show is a good idea; most people don’t consult their schedules and just line up once they see a character so if you get there a little early you’ll get the jump on them and be near the front of the line.