Say ‘I Do’ At Denny’s New Las Vegas Chapel 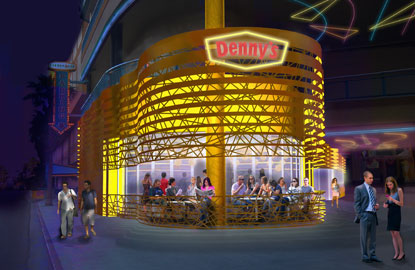 Last week Denny’s— the all-American diner chain know for dishing up plates of eggs and fried potatoes 24/7— rolled out a new attraction. And it has nothing to do with food.

Engaged couples can now swap their heartfelt vows at the Denny’s chapel in downtown Las Vegas (450 Fremont St.) once it opens later this year. Tucked into the brand-new 6,400-square-foot restaurant will be a chapel, as well as a full bar, an amenity not found in many of the 1,680 Denny’s locations. Like all other Denny’s locations, it will be open 24 hours.

Skewing away from tradition, the Denny’s chapel will bake wedding cakes crafted from their famous Pancake Puppies, which are bite-sized round pancakes for the uninitiated. (To recap, that would mean the couple’s wedding cake would be made of mini-round-pancakes.) Denny’s will also give couples the opportunity to "announce" their wedding with a visit to a photo booth (stocked with Vegas-y props), where pictures can be shared on Facebook, Twitter, and the like.

The excitement doesn’t stop there. This new Denny’s restaurant is expected to make waves in the design world. James Wines, president and creative director of SITE Environmental Designs, known for the Shake Shack design concept in New York City’s Madison Square Park, dreamt up the cutting-edge design which features the signature canary-yellow colors, but with a futuristic twist that can only belong in Vegas.

File this under "finally!"