Sneak in a last-minute summer vacation without totally blowing your budget.

Labor Day is fast approaching, which means that if you haven’t taken a summer vacation yet, it’s now or never. If you’re looking to get away in August, we’ve picked out four destinations to visit, whether you’re interested in exploring the great outdoors, chowing down on lobster rolls, or sightseeing in one of the world’s best capital cities. Best of all, each of these trips costs about $1,000 for airfare and hotels, meaning you can take any one of them without totally demolishing your bank account.

Travelers have long raved about living the “pura vida” in Costa Rica, catching the surf, hiking the volcanoes, or sipping cocktails poolside at eco-chic lodges. The Central American country is known for being particularly budget-friendly, and you can find great deals year-round.

While it’s easy to book your own adventures independently, you can find great organized trips through sites like Groupon: this August, there are deals for Costa Rica organized by Travel By Jen, a discount travel agency. Depending on your departure city, you can spend anywhere from $899 (Houston) to $1,029 (San Francisco) for flights, seven nights at a variety of hotels, and a week-long car rental—manual transmission only—plus breakfast each morning.

On your self-guided trip, you’ll stay in the shadow of Arenal Volcano, hit the swim-up bar at a Caribbean beach resort, and experience the culture of the capital city, San José.

3 Nights in Bar Harbor and Acadia National Park for $1,100

August is a beautiful month to visit Maine, as the days are just the right amount of hot without the stifling humidity found elsewhere in the country—it’s perfect weather to enjoy a refreshing dip in the Atlantic. Head up to Acadia National Park, where you can hike to the summit of Cadillac Mountain, go swimming at Sand Beach, or visit the Scenic Bass Head Lighthouse. After working up an appetite, grab a lobster roll in nearby Bar Harbor.

To get there this August, fly into Portland, Maine—at the time of writing, tickets cost about $300 from San Francisco, $140 from New York, and $260 from Dallas—and rent a car for about $200 for four days. Drive three hours up to Acadia and Bar Harbor, where a staying at a B&B will run you about $200 a night in the high season. So for a four-day, three-night trip, you can expect to spend anywhere from $740 to $1,100.

Though August is prime travel time for many tourists around the world, many Parisians will have left the city for their annual summer holiday, which means the streets might be a little quieter than usual—and that isn’t a bad thing.

There’s never a bad time to go to Paris, and this month isn’t an exception. Though August is prime travel time for many tourists around the world, many Parisians will have left the city for their annual summer holiday, which means the streets might be a little quieter than usual—and that isn’t a bad thing. Unfortunately, Paris is by no means a ghost town, so you’ll still find lines at all the top attractions like the Eiffel Tower and the Louvre, so make sure to book tickets in advance if you can.

For last-minute deals on trips to Paris, check out sites like Travelzoo, which aggregates packages offered by all manner of tour operators and travel agencies. In August, you can spend $959 for three nights in Paris, followed by three nights in Nice, with all hotels and flights included (even the one between the two cities). The deal is offered by Tripmasters and is available from a number of departure cities, including Atlanta, Denver, and Fort Lauderdale. If you’re leaving from New York, the price is slightly higher: $1,059. 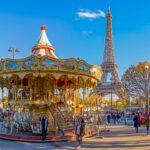 RELATED STORY
Top 20 Free Things to Do in Paris

Forget the tourist hotspots—if you want to go to a fantastic under-the-radar destination this August, pick Saskatoon, Canada, the largest municipality in Saskatchewan. Set in the middle of the sprawling prairie, Saskatoon (which is the birthplace of Joni Mitchell) has a small-town vibe with a big-city punch, namely the Remai Modern, a major art museum that collects everyone from Picasso to Nancy Spero. Of course, there are plenty of other activities in town, from numerous distilleries to the Wanuskewin Heritage Park, an archaeological site that gives insight into the region’s First Nations history.

Flights to Saskatoon range from $275 from Los Angeles to $312 from Chicago, and a four-day rental car costs about $80. The fanciest boutique hotel in town, the James, will only run you about $165 a night. All in, you can easily keep to your budget with a total spend of anywhere from $1,015 to $1,052 for four nights, depending on where you’re coming from.