We sometimes forget how huge South America is and how far key tourist sites — say Patagonia or Machu Picchu — are from their respective country’s capital. Hitting them requires that you spend a lot of time (and money) in transit. But we’ve come up with five easy, inexpensive outings that let you sample continental delights near major urban centers.

Be a Good Sport
On a good day, the sites of Santiago can take your breath away. On a bad day, the smog can too, which is why Cascada de las Animas (in the Maipo Canyon 40 miles southeast) is so popular with fresh air-loving daytrippers. Occupying 10,000 acres, this family-owned nature reserve has waterfalls, pine-dotted forests, and jagged mountains. The center of activity, however, is the gorge bisecting it. Adrenaline junkies can skim 82 feet above it on a zipline, or raft through its white-water rapids. If you want to slow down and see the scenery, horseback treks are offered, too.

But do come prepared. Even a mild outing takes stamina and some guts, as horses negotiate twisty trails and pitch themselves up steep Andean slopes. Luckily, the surreal views are ample reward. On the mountain side is an arid, cactus-covered landscape that resembles the set of an old-time Western. On the river side, vistas extend over lush vineyards that wouldn’t look out of place in Tuscany. Rafting or riding excursions start at $35, and roundtrip transportation ($138 for two passengers) is available.

Stop and Smell the Roses 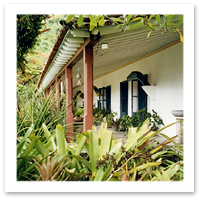 Rio de Janeiro can be exhausting. So once you have checked out the girls — and boys — from Ipanema, danced the night away, and blamed it all on the Bossa Nova, it’s time relax at Sitio Roberto Burle Marx. The late landscape designer’s estate (photo, right), 40 miles southwest of Rio, boasts 3,500 tropical and semi-tropical species. Yet form matters here as much as flora. Burle Marx was a modernist master who turned his plantation into a 100-acre living laboratory. Hence, naturalistic vegetation is interspersed with abstract plantings that evoke the bold mosaics of his best-known creation: Copacabana’s promenade.

After perusing the natural wonders of the estate, you can explore his studios and a farmhouse-cum-museum, which showcase his eclectic collection of South American art and artifacts, as well as his own paintings. Depending on your preference — and proficiency in Portuguese — you can reach the park by bus, taxi or organized tour. Since a $3 guided visit lasts only 90-minutes, you can add on a stop at Casa do Pontal (Brazil’s largest folk-art museum) or lunch at Restaurante Point de Grumari.

Beach Yourself
Uruguay’s capital, Montevideo, has many charms, most notably an atmospheric Old Town and pedestrian-friendly waterfront Rambla. However, when summer arrives, the local see-and-be-seen set, together with their Argentine and Brazilian counterparts, hightail it to the peninsular resort of Punta del Este, 85 miles east. Punta is the spot for well-heeled South Americans to shed their shoes and inhibitions. Celeb sightings peak late December through mid-January, but beaches remain attractive even in the absence of supermodels or movie stars, and the town itself offers year-round diversions.

Start with a cocktail at Casapueblo, a Gaudi-esque extravaganza on the edge of town. Then park yourself on a strand fronting either the Atlantic or tamer Rio de la Plata. Top things off with some shopping on Calle 20 (where the brand-name boutiques are concentrated) or try your luck at the Vegas-style Conrad Casino. Just remember: the glitterati don’t take coach tours. So rent the coolest car you can afford and drive yourself to Punta on the modern toll highway.

Have a Field Day 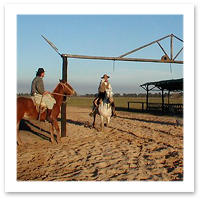 If you have neither the time nor inclination to shave a night off your Buenos Aires itinerary, you can still get a taste of Pampas ranch life and of that fabled Argentina beef by booking a dia de campo (day in the fields). Committed carnivores gravitate to Estancia Santa Susana, a 3000-acre property (photo, right) 48 miles northeast of the capital. It advertises activities like horseback riding which are themselves a bit of a cattle call (no surprise because Santa Susana is popular with tour groups). Yet it’s hard to beat the food: steak, chorizo, blood sausage, and short ribs grilled over a mammoth outdoor pit and eaten at communal tables. Mealtime entertainment ranges from tango dancing to a high-stepping routine done with boleadoras (Argentina’s answer to a lariat).

Kitschy? Yes. Impressive? Absolutely! Especially when the action moves outdoors for a display of horsemanship that culminates in carreras de sortijas featuring gauchos who ride at full gallop as they attempt to spear a tiny ring suspended from a string. Full-day excursions cost $50.

A Blast from the Past
Machu Picchu is, quite literally, the stuff of legend. Nevertheless, travelers based in Lima needn’t spend an hour on a plane followed by three-plus on a train to appreciate Peru’s archaeological legacy. That’s because Pachacàmac, an often overlooked yet stunning Pre-Columbian complex, lies just 19 miles south of the capital. This ancient collection of plazas, palaces, temples and pyramids was a major pilgrimage site dedicated to “the One who animates the world.”

Originally developed by the Huari in the first century, it predates Machu Picchu by more than a millennium. The Incans, though, conquered Pachacàmac in the 15th century, leaving their mark in the form of new constructions, including the Accllahuasi (Palace of the Chosen Women). Much of the site has been restored, and artifacts uncovered in the process — among them a carving of the titular god — are on display in its museum. Though accessible from Lima by car or “combi” mini-bus, the preferred way to see Pachacàmac is on a half-day guided tour. Lima Vision offers a reliable one priced at $35.