Last summer, my family and I flew to Poland. Usually our time there is allocated to visiting relatives and feasting on fried pork cutlets and sweet carrot soufflé. It’s a time for my two sons (ages 4 and 7) to brush up on their Polish, and a time for my American husband to nod a lot and smile while my grandmother speaks to him as if he were a native.

This time we decided to expand our horizons. I liken my hometown of Kielce to a Harrisburg, PA—plenty of attractions, if you dig deep enough. My favorite parts have always been the outskirts, which boast swimming holes like the one in woodsy Kaniów, medieval castle ruins in Checiny, a kitschy children’s television and fairytale museum in Pacanów, (the Europejskie Centrum Bajki), and Poland’s oldest tree, in Zagnansk, a 670 year old oak, named Bartek. There’s even a Park Jurajski in nearby Baltów, a kind of Polish Jurassic Park, where in the 70s archeologists found dinosaur fossils in the surrounding Swietokrzyskie Mountains, and in 2004 the area was turned into, what else, a theme park. But this was my husband’s fourth trip to Kielce, and we knew it well. So we rented a maroon Vito—a European style SUV/van hybrid—put it in gear and drove north, toward the Baltic. 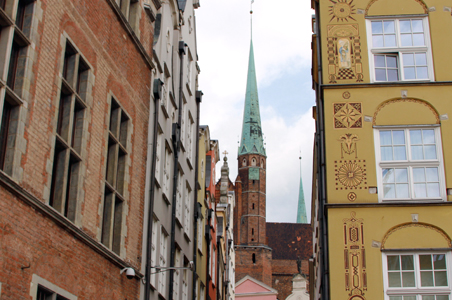 Poland is a country of burgeoning everything, even highways, but they are still few and far in between. Case in point: we got stuck en route behind a truck for two hours with no entertainment for the kids.

Thirty kilometers past Kielce, and we passed Bodzentyn, with its’ 14th century old castle, smack dab in the middle of a piddly village square. Birchwood forests and tiny villages with funny names like Butter 1 and Butter 2, slowly rolled past us. Intermittently, we stopped at roadside bars to snack on pierogi and grilled kielbasa for $4 a plate. I was stunned anew by how beautiful the countryside is, and by how in this corner of the world you can still feel like you are somewhere foreign. We arrived in Gdansk at dusk, tired but exhilarated. The journey had eclipsed everything else, including a pang of carsickness. 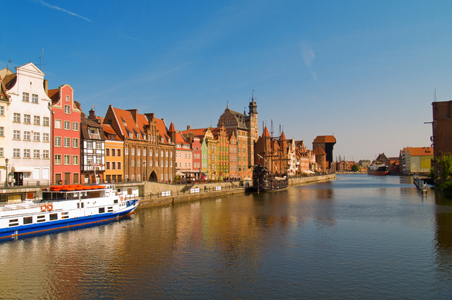 The Hilton Gdansk Hotel stood right on the water, and that’s where we stayed, partly because it boasted an indoor pool. After breakfast we headed straight to the Old Town, a ten-minute walk from Targ Rybny Street. We walked toward the famous Brama Zurawa, or ‘Crane Gate’, the main gateway seaport on the Motlawa River, built in 1363. Indeed, a crane statute sat atop the tower at the entrance to the old town square. We walked around Zielony Rynek, eating tube-like wafers stuffed with homemade crème (called rurki z kremem), and taking pictures of copious steeples and the city’s famous monument, Fontana Neptuna. In the afternoon, we boarded a ‘pirate’ ship that sailed down the Motlawa for far too long, but offered hot tomato soup in paper cups. Back on land, we bought liters of gold speckled liqueur, indigenous only to these parts, called Goldwasser. 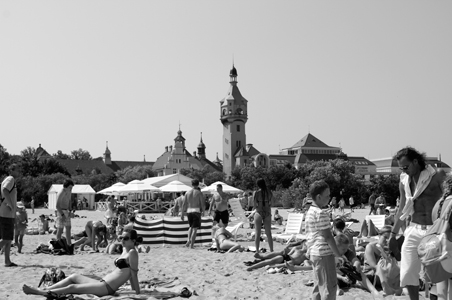 The next morning we drove to Sopot, twenty minutes away. We parked the Vito and walked up main street, Bohaterów Monte Cassino. We posed for photos in front of the Krzywy Domek or Crooked House, and then headed for the longest pier in Europe, which, for $2.50, lets you walk far out to sea. Later, the boys braved the chilly waters of the Baltic, while I stayed behind taking pictures. We got in the car, sandy and spent, laden with yellow, green, and orange amber jewelry and seashells, and headed home.

Three hours later, we stopped in Torun for dinner. Torun is a feudal city founded in the 13th century, and its’ official motto is "I will endure." And it has. It was one of the few metropolises not bombarded during World War II. It’s also the birthplace of astronomer Nicholas Copernicus, or Mikolaj Kopernik, as we like to call him. The city is wondrous, preserved in antiquity, with yummy pubs and restaurants lining the Town Square. One of the most curious sights is a medieval prison off Piekary Street, called OkrÄ…glak, erected in the 14 century, renovated in 1992 and still in use today. We waved to the tiny windows lining the spiral, and then walked around the corner and had delicious mushroom kielbasa crepes at Restaurcja Manekin.

Of course, we couldn’t leave without a bag or two of torunskie pierniki: soft, glazed gingerbread biscuits, whose recipe is renowned and stems back to 1380. The kids, sated and tired, slept most of the way back, and by midnight, we were parking the car in front of my grandmother’s apartment building.

If you find yourself near central Europe with a few days to spare, hop on a cheap flight to Krakow. Rent a car (gas is expensive, but what else is new) and head north. Give yourself three days. It’s enough. My husband warns that driving cross-country in Poland is not for the faint of heart; the roads are extreme, and you’ll find yourself traversing from autobahn to bumpy back-road within the span of an hour. But it’s worth it. A road trip—sans tourist guide or tour bus—is still the best way to get a glimpse of a country’s marrow, the best way to immerse yourself in the landscape and people. Grab a map, brush up on your stick-shift skills, hop in the car…and drive.

Dagmara Dominczyk was born in Poland and immigrated to New York City at the age of seven. She has acted in numerous films, TV series, and plays. She is married to the actor Patrick Wilson, with whom she has two sons. She lives in New Jersey. Her book, The Lullaby of Polish Girls, was just released last month.