News Tina Charisma 'Regenerative Travel' Is the New Buzz Phrase, but What Does It Mean?
Home  >  News   >   10 Things to Know When Visiting Greece

10 Things to Know When Visiting Greece 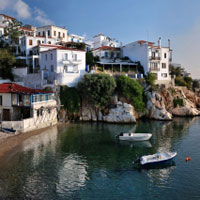 How should you wave goodbye? Who should pay for what at meals? From greetings to dining out, here are the top things you need to know (and avoid) on your next trip to Greece.

1. Be prepared for personal questions

Greeks are friendly and openly affectionate. It is not uncommon, for example, to see women strolling arm in arm, or men kissing and hugging each other. Displays of anger are also quite common. To the person who doesn’t understand Greek, the loud, intense conversations may all sound angry—but they’re not. But there’s a negative side to Greeks’ outgoing nature. Eager to engage in conversation over any topic, they won’t shy away from launching into political discussions about foreign policy (best politely avoided) or asking personal questions like how much money you earn. The latter isn’t considered rude in Greece, but don’t feel like you need to respond.

2. Shake hands when meeting someone new

Visitors are sometimes taken aback by Greeks’ gestures or the ease in which they touch the person they’re speaking with—take it all in stride. If a pat on the hand becomes a bit too intimate, just shift politely and the other person will take a hint. On the other hand, kissing someone you’ve just met good-bye on the cheek is quite acceptable—even between men. When you meet someone for the first time, it is customary to shake hands, but with acquaintances the usual is a two-cheek kiss hello and good-bye.

One thing that may disconcert foreigners is that when they run into a Greek with another person, he or she usually doesn’t introduce the other party, even if there is a long verbal exchange. If you can’t stand it anymore, just introduce yourself.

4. Never gesture towards someone’s face with an open palm

Greeks tend to stand closer to people than North Americans and northern Europeans, and they rely more on gestures when communicating. One gesture you should never use is the open palm, fingers slightly spread, shoved toward someone’s face. The moutza is a serious insult.

5. Nodding your head means no

Another gesture you should remember, especially if trying to catch a taxi, is the Greek "no," which looks like "yes": a slight or exaggerated (depending on the sentiment) tipping back of the head, sometimes with the eyes closed and eyebrows raised.

6. Wave good-bye with your palm facing you

When you wave with your palm toward people, they may interpret it as "come here" instead of "good-bye"; and Greeks often wave good-bye with the palm facing them, which looks like "come here" to English speakers.

Greeks often eat out of communal serving plates, so it’s considered normal in informal settings to spear your tomato out of the salad bowl rather than securing an individual portion. Sometimes in tavernas you don’t even get your own plate.

Note that it is considered tsigounia, stinginess, to run separate tabs, especially because much of the meal is Chinese-style. Greeks either divide the bill equally among the party, no matter who ate what, or one person magnanimously treats.

A good host insists that you eat or drink more, and only when you have refused a number of times will you get a reprieve; be charmingly persistent in your "No."

Always keep in mind that Greeks have a loose sense of time! They may be punctual if meeting you to go to a movie, but if they say they’ll come round your hotel at 7 pm, they may show up at 8 pm. Don’t take it personally unless it’s a romantic date!

PLAN YOUR VISIT to Greece.