Hotels & Lodging Amy Fallon Quiet Hours, Curfews, and *Chores*? Why the Tide May Be Turning Against Airbnb
NewsCustoms and Etiquette in Paris: 15 Things Every Visitor Should Know

Customs and Etiquette in Paris: 15 Things Every Visitor Should Know

Only the lucky few ever truly shed their tourist aura in Paris. But what can you do to minimize any awkward gaffes? Read on! 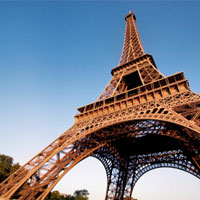 The French like to look at people—that’s half the point of cafés and fashion, so get used to being looked at; it’s as natural here as breathing. They’ll look at your shoes or your watch, check out what you’re wearing or reading.

What they will not do is maintain steady eye contact or smile. If a stranger of the opposite sex smiles at you, it’s best to do as the French do and return only a blank look before turning away. If you smile back, you might find yourself in a Pepé Le Pew–type situation.

Visitors’ exuberance—and accompanying loud voices—may cause discreet Parisians to raise their eyebrows or give a deep chesty sigh. They’re not being rude, but they’re telling you that they think you are. Be aware of your surroundings and lower your voice accordingly, especially in churches, museums, restaurants, theaters, cinemas, and the métro.

When entering and leaving a shop, greet and say good-bye to the staff. A simple bonjour, monsieur/madame and au revoir, merci are considered a virtual necessity for politeness.

When asking for directions or other help, be sure to preface your request with a polite phrase such as excusez-moi de vous déranger, madame/monsieur (excuse me for bothering you, ma’am/sir).

When meeting someone for the first time, whether in a social or a professional setting, it’s appropriate to shake hands. Other than that, the French like to kiss. For the Parisians, it’s two bisous, which are more like air kisses with your cheeks touching lightly—don’t actually smack your lips onto the person’s face!

When visiting a French home, don’t expect to be invited into the kitchen or to take a house tour. The French have a very definite sense of personal space, and you’ll be escorted to what are considered the guest areas. If you’re invited to dinner, be sure to bring a gift, such as wine, champagne, flowers, or chocolates.

Table manners are often considered a litmus test of your character or upbringing. When dining out, note that the French fill wineglasses only until they are half full—it’s considered bad manners to fill it to the brim. They never serve themselves before serving the rest of the table. During a meal, keep both hands above the table, and keep your elbows off the table.

Bread is broken, never cut, and is placed next to the plate, never on the plate. When slicing a cheese, don’t cut off the point (or “nose”).

Coffee or tea is ordered after dessert, instead of with dessert. (In fact, coffee and tea usually aren’t ordered with any courses during meals, except breakfast.)

Checks are often split evenly between couples or individuals, even if someone ordered only a salad and others had a full meal.

Eating on the street is generally frowned on—though with the onslaught of Starbucks you can sometimes see people drinking coffee on the go.

One of the best ways to avoid being an Ugly American is to learn a little of the local language.

The French may appear prickly at first to English-speaking visitors, but it usually helps if you make an effort to speak a little French. A simple, friendly bonjour (hello) will do, as will asking if the person you’re greeting speaks English (parlez-vous anglais?). Be patient, and speak English slowly—but not loudly.

A phrase book and language-tape set can help get you started.