Coronavirus David Silverberg Are Your Kids Heading Back to Summer Camp? Here's What You Need to Know
Home  >  News   >   Cunard Tests SeaWalk in Norway 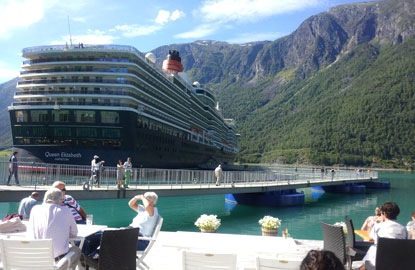 Travelers have been getting from point A to B aboard ships for hundreds of years, so it’s hard to believe that there’s anything new when it comes to offloading passengers from ship to shore. But a Norwegian company called SeaWalk has, in fact, innovated a new method of embarking passengers from cruise ships that won’t entail getting in and out of a tender.

SeaWalk is a motorized floating pier that can be implemented instead of a traditional—and expensive—fixed pier. This new technology could be exciting for small ports that wish to welcome cruise passengers as well as those who can’t build a traditional. This also opens up new itinerary possibilities for ships that are too large to dock alongside the pier at a port, but could utilize a retractable floating pier.

When a ship’s in port, the floating pier—a series of walkways resting on large, floating pontoons—is extended and moored alongside the ship. This allows passengers to easily come and go as they please. According to company officials, this method can accommodate disembarkation of more than 4,000 passengers in just an hour. When the ship sets sail, SeaWalk is "folded and parked" close to shore until its next use.

Passengers aboard Cunard’s Queen Elizabeth were the first to put SeaWalk to the test in the real world when the ship called on the small port of Skjolden, Norway earlier this month. With a population of just a few hundred people, the idyllic town of Skjolden is one of those picture perfect ports worth a visit. SeaWalk will allow more cruise ships to get to this innermost cruise port in Norway at the head of the longest navigable fjord in the world, Sognefjorden.

When news of the successful test made its way across the Internet, cruise enthusiasts eagerly started drawing up a list of ports that would benefit from SeaWalk. At that top of the list were tender ports in island destinations like French Polynesia and Grand Cayman in the Caribbean

Watch a video that shows how SeaWalk works.