Manhattan may not have the valleys of Maui or the beaches of the Seychelles, but when it comes to international cuisine, this island takes the cake (and then some). New York is one of the world’s most diverse cities, so it’s little surprise that the culinary traditions of so many different cultures are well represented throughout its five boroughs. If you’re craving an exotic foodie-friendly getaway, New York may be just the ticket—here are five Manhattan neighborhoods where culinary culture is best tasted. 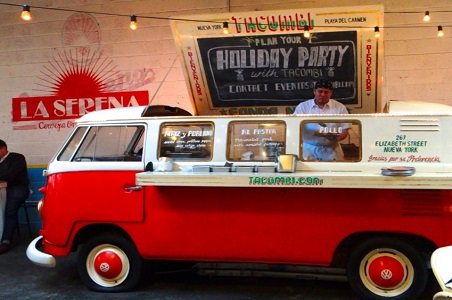 On the surface, NoLIta (short for "north of Little Italy") feels much more European than Mexican, but New York is always full of surprises and this nabe is no exception. On the same street as countless designer boutiques and cozy cafés, hit up Tacombi (267 Elizabeth St.), a Mexican joint that serves tacos from an old Volkswagen. Inspired by the Yucatán and other regions of Mexico, their tacos are made from scratch daily—and when happy hour rolls around, this place is packed. Also on Elizabeth Street, try Café el Portal (174 Elizabeth St.), with specialties like fish tacos and cactus burritos. On a hot summer day, their sangria really hits the spot.

At first glance, Little Italy, especially around its main drag at Mulberry Street, resembles a carnival of lights rather than the historic neighborhood that it is. Lined with Italian restaurants touting countless menus to sift through, deciphering the authentic from the phony here can be daunting. For a solid bet, head to Da Nico (164 Mulberry St.) for their fresh spaghetti in red sauce and crisp pizza, made straight from the brick oven in the foyer. Just a few doors down, Il Cortile (125 Mulberry St.) is decorated in neoclassical style and serves up fresh Italian dishes. For a famous slice à la Big Apple, Lombardi’s (32 Spring St.) is a winning choice; they certainly have staying power, as the first pizzeria to open in the U.S.

Ethiopian in the East Village

Perhaps best known for its vibrant nightlife scene, the East Village is dripping with artistic expression. That same creative flair extends to the culinary scene, as well, with a multitude of cultures represented. Hone in on a culinary tour of Ethiopia at Awash (338 E. 6th St.) to sample a few of their spicy vegetarian and meat dishes. Meskel (199 E. 3rd St.) and Haile Bistro (182 Ave. B) are two more similarly styled restaurants located within walking distance. Ethiopian food is meant to be shared, so order several dishes to split. Bonus: Prices are generally reasonable, even by New York City standards. 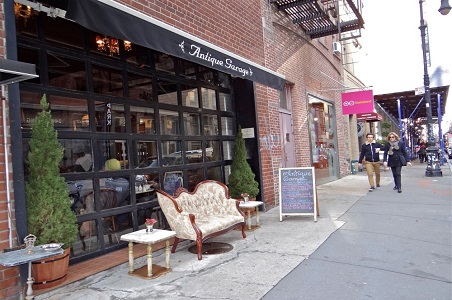 Similar to the diverse countries bordering the Mediterranean Sea, SoHo covers a lot of ground in terms of food. For a little bit of just about everything, West Broadway between Broome and Grand offers a slew of options ranging from Argentinian to French. For eclectic Mediterranean flavors, slip into Antique Garage (41 Mercer St.) where a quiet retreat awaits—grab a seat on their plush velvet sofa that faces the street for the best people-watching. Nearby, Pera (54 Thompson St.) has a slightly more sophisticated feel, and the private garden and roof access gives afford intimacy.

Unlike Little Italy, a walk through Chinatown really feels like you’ve been transported across the globe. Locals here are the real deal and you’ll see plenty of signs written in Chinese and hear it spoken on the streets and in shops. For a late-night bite, Great NY Noodletown (28 Bowery) is a must-hit, but for something more traditional, try Chinatown’s oldest dim sum restaurant, Nom Wah Tea Parlor (13 Doyers St.).