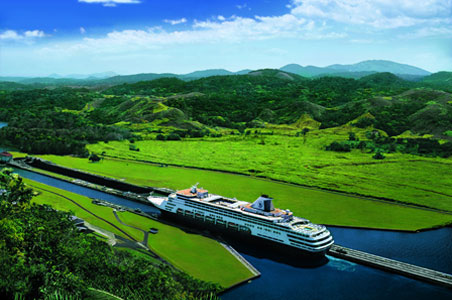 Hop aboard the right repositioning cruise (a cruise cruise that “repositions” between seasonal sailing regions, with different embarkation and disembarkation ports) and you can find yourself with a well-priced itinerary that really packs a punch with diversity. Find one that incorporates transit through the Panama Canal, and you’ve got the ingredients for a brag-worthy sailing that earns any cruise devotee coveted stripes at budget-crunching prices.

I recently found just that ticket with a Holland America cruise from Valparaiso, Chile, to Fort Lauderdale, Florida, while it was repositioning from a stretch of South America sailings to its summer station in New England and Canada. The 18-night adventure combined cultural highlights in South America (stops in Chile, Peru, Ecuador, and Colombia) with a Panama Canal transit, and some Caribbean fun-in-the-sun, all from under $100/night.

The trip kicked off in Valparaiso, Chile—a gritty yet packed-with-character port town where roaming the maze of hilltop streets turned over trendy eateries and boutiques, ubiquitous graffiti and murals, and century-old funiculars. 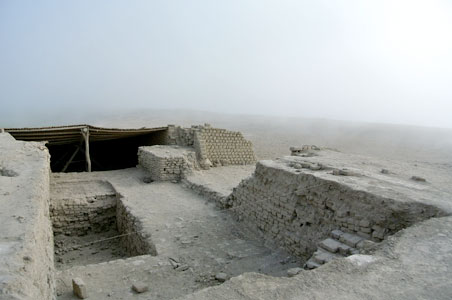 Once the cruise was underway, highlights included an overnight call in Lima, though the real gem of Peru was via Salaverry, where the well-executed "Archaeological Trujillo" excursion showcased pre-Incan sites like the Chan Chan citadel and Cao Museum.

Pushing forward through Ecuador (with a call in beach town Manta) and crossing the equator, we secured our place in the canal queue with an overnight stop in Panama’s Fuerte Amador, gateway to Panama City, where the UNESCO-protected colonial old town, Casco Viejo, was well worth a wander.

Predictably, the clincher was the full-day Panama Canal transit, shuffling us through one of the 20th century’s greatest engineering marvels, from the Pacific Ocean to the Caribbean Sea. Guests flocked to the ship’s front bow (opened just for the transit), offering coveted front-row seats for ogling the sometimes tight squeezes, massive lock gates, boat-tugging locomotives, and ongoing canal expansion work. The Panamanian sun was a force to be reckoned with; I found the top-deck Crow’s Nest observation lounge, with its floor-to-ceiling windows—and AC—a far more comfortable option.

Once through, Cartagena, Colombia, with its lovely, UNESCO-protected colonial quarter, invited strolling, with many shops and eateries set behind colorful facades dripping with bougainvillea. I disembarked here, while the ship continued on to Caribbean cruise circuit mainstays like Falmouth, Jamaica, and Georgetown, Cayman Islands, before finishing in Fort Lauderdale. 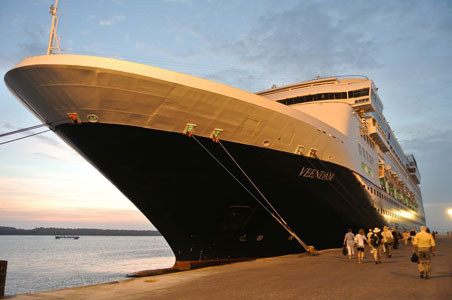 The venerable Holland America Line, celebrating its 140th anniversary this year, combines the more genteel traditions of the high seas with the best of modern-day amenities, at a great value. For our sailing, the 1,350-passenger Veendam packed in plenty of diversions, with lots of space to spread out.

The Explorers Café (powered by The New York Times), with its specialty coffee bar, library, game tables, internet stations, and window-facing leather loungers, served as the ship’s social hub and hangout. The Culinary Arts Center, in partnership with Food & Wine magazine, put on interactive cooking lessons in a demonstration kitchen. The Digital Workshop offered camera and computer courses in a computer lab space. Well-attended events included Spanish language classes and enrichment lectures on topics like feng shui or the history of the canal.

Out on deck, guests enjoyed the Lido pool (crowned by a retractable roof), numerous hot tubs, a basketball and tennis court, and wraparound decks for walking or jogging. The spa offered a salon, sauna, thermal suite area, and fitness center.

Numerous onboard watering holes were most popular during the pre-dinner cocktail hour, with regular entertainment (with music by anyone from Elvis to Andrew Lloyd Webber). The Crow’s Nest lounge converted into a nightclub, though post-dinner nightlife proved rather subdued (party-hearty crowds needn’t apply).

Other evening diversions included ducking into the casino, catching a movie on the big screen, or hitting up the two-story lounge, with nightly entertainment featuring vocalists straight off Broadway; guest comedians and magicians; and more. 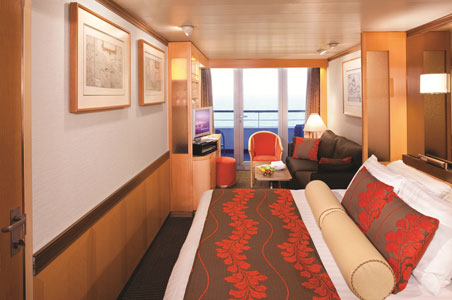 Cabins were spacious, with comfy beds, flat-screen satellite TVs and DVD players, and a seating area and small vanity/desk; most came with balconies. Added during a 2009 ship refurbishment, new lanai staterooms offer sliding glass doors onto the outdoor deck, while spa cabins come with extra spa amenities and privileges.

Despite the truly exemplary onboard effort to avoid the spread of gastrointestinal illness, there was indeed a small outbreak during our ship, with about 5 percent of passengers complaining of symptoms and requiring quarantine.

The crew hailed largely from Indonesia and the Philippines, and proved constantly cheery and efficient (though English was lacking with some, including our room steward).

The relaxed and refined onboard atmosphere catered largely to mature adult cruisers, mostly repeat Holland America customers, hailing largely from the US, Canada, Europe, Australia, and Latin America. Though the ship did have dedicated kids’ and teens’ centers and programs, we could count the number of children we saw aboard on one hand.

Holland America’s Panama Canal cruises average about two to three weeks in duration, typically connecting East and West Coast US destinations (like Florida and California) with stops in Central America, the Mexican Riviera, and/or the Caribbean. Itineraries run on five ships—the Zuiderdam, Amsterdam, Zaandam, Westerdam, and Veendam. The Veendam will cruise the canal again in October 2013 and February 2014—try the 14-night transit from San Diego to Fort Lauderdale on February 8, with affordable rates from $1,899/person.