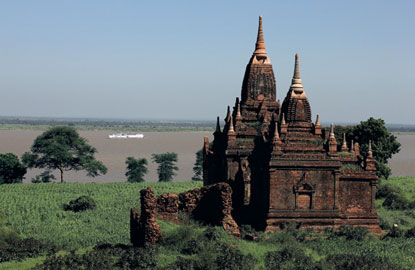 Alan E. Lewis, CEO of Grand Circle Corporation, recently spoke to the press about the announcement that Grand Circle Cruise Line will offer a new small ship tour in Burma along the Irrawaddy River. "The release of Aung San Suu Kyi (National League for Democracy) from two decades of house arrest and her election to parliament has helped the once isolated Burma begin opening its doors to the West. From calling for a boycott of travel to Burma, the Nobel Peace Prize-winner is now encouraging responsible travelers to visit her country."

Grand Circle isn’t alone in announcing new and expanded itineraries in this mysterious country on the Bay of Bengal with Bangladesh to its west, China in the north, Laos and Thailand on its eastern boundary, and Malaysia to its south. Pandaw River Cruises is sailing its new RV Katha Pandaw and Pandaw II on the Irrawaddy with 10-, 14-, and 20-night itineraries while Orient-Express, whose Road to Mandalay is scheduling three-, seven-, and 11-night journeys.

With departures from March–May and September–December 2013, Grand Circle’s "Burma & the Irrawaddy River: Bagan to Mandalay" itinerary includes time on land and on the river. First, passengers fly into Bangkok, for a four-night stay at a hotel followed by three nights in Yangon (also known as Rangoon), Burma’s former capital and most populated city. Fly from Yangon to Bagan to board the cruise line’s privately chartered 34-passenger riverboat, RV Paukan, for a seven-night cruise. The experience includes exploration of 2,000-year-old temples, remote villages, local trading centers, and important Buddhist sites en route to Mandalay.

Pandaw first launched its company in Burma, built its first ships there, and now they sail a variety of itineraries along the Irrawaddy. For a solid introduction to Burma, consider "The Golden Land: 10 Nights Mandalay-Pagan-Prome" itinerary, which begins with a night in Yangon before boarding the ship in Mandalay. From there you’ll visit villages, pagodas, and pagan monuments as well as ascend Tan Kyi Taung Mountain by foot or via a World War II-era jeep for a memorable sunrise over Pagan.

Orient-Express supplies the most luxurious option in Burma and it includes time at The Governor’s Residence, a colonial-style mansion in Yangon, as well as a river cruise along the Irrawaddy River aboard its sleek 82-passenger Road to Mandalay. While Orient-Express offers three- and seven-night itineraries similar in scope to Grand Circle and Pandaw, it’s also currently sailing a unique 11-night journey called "Gorges of the Far North." Passengers travel from Bhamo, just 50 miles from the Chinese border, and explore the remote northernmost reaches of the Irrawaddy. This area is only accessible via riverboat during dry season. Highlights of the tour include the ancient island pagodas Thihadaw and Shwe Paw, hikes in the jungles and teak forests around Kyan Hnyat, rickshaw rides, and cultural performances like traditional Bagan dances.

Want to know more about Burma? Check out these 17 things to know before you go to Burma.