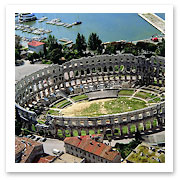 Arena, Pula
Designed to accommodate 22,000 spectators, Pula’s arena is the sixth-largest building of its type in the world (after the Colosseum in Rome and arenas in Verona, Catania, Capua, and Arles). Construction was completed in the 1st century AD, under the reign of Emperor Vespasian. During the 16th century, the Venetians planned to move the Arena stone by stone to Venice, where it was to be reconstructed in its original form. The plan failed, and it has remained more or less intact. Today it is used for summer concerts. Amfiteaterska ul. May-Sept., daily 8-9; Oct.-Apr., daily 9-5.

Dakovo Cathedral, Dakovo
In Dakovo’s town center is this majestic red-brick, neo-Gothic cathedral, designed by architect Frederick Schmidt. Consecrated in 1882 after two decades of construction, the three-nave structure is distinguished by two steeples towering to 84 meters (274 feet). The inside walls feature colorful biblical scenes painted over 12 years by the father and son team of Alexander and Ljudevit Seitz. The striking blue ceiling is dotted with gold stars, and the floor is paved with impressive red, yellow, and black checkered tile. Trg Strossmayera. 031/811-784. Daily 8-noon and 3-6. 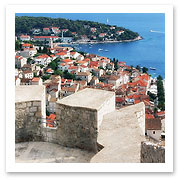 Hvar
The little town rises like an amphitheater from its harbor, backed by a hilltop fortress and protected from the open sea by a scattering of small islands known as Pakleni Otoci. Along the palm-lined quay, cafes and restaurants are shaded by colorful awnings and umbrellas. A few steps away, the magnificent main square, Trg Sveti Stjepan, the largest piazza in Dalmatia, is backed by the 16th century Katedrala Sveti Stjepan (Cathedral of St. Stephen). Hvar is a popular tourist destination, so expect it to be crowded and expensive in peak season. The easiest way to reach Hvar is to catch a mid-afternoon Jadrolinija catamaran from Split, which stops at Hvar town before continuing to the South Dalmation coast. 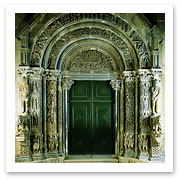 Katedrala Sveti Lovrijenac (Cathedral of St. Lawrence), Trogir
The remarkable structure, completed in 1250, is a perfect example of the power of Romanesque architecture. The great door, flanked by a pair of lions that form pedestals for figures of Adam and Eve, is framed by a fascinating series illustrating the daily life of peasants in a kind of Middle Ages comic strip. In the dimly lit Romanesque interior, the 15th-century chapel of Sveti Ivan Orsini (St. John Orsini) of Trogir features statues of saints and apostles in niches facing the sarcophagus. The bell tower, built in successive stages—the first two stories Gothic, the third Renaissance—offers stunning views across the ancient rooftops. Trg Ivana Paula II. Free. June-Oct., daily 8-7; Nov.-May, daily 8-noon and 4:30-7. 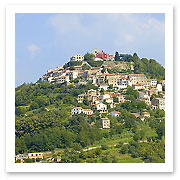 Motovun
Motovun is a ravishing place. The king of Istria’s medieval hill towns, with a double ring of defensive walls, may evoke a scene straight from Lord of the Rings. Motovun is the place to visit if you opt to travel inland for a day or two from the sea. A walk around the ramparts offers views across the oak forests and vineyards of the Mirna Valley, and just outside the walls stands a church built according to plans by Palladio. Avoid this place in late July, when the Motovun Film Festival pulls into town. 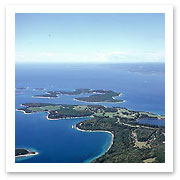 National Park, Brijuni
Archduke Franz Ferdinand summered here, as did such literary lights as Thomas Mann and Arthur Schnitzler; James Joyce came here to celebrate his 23rd birthday. Two world wars ensued, however, and the islands’ fate faded as they changed hands—coming under Italian rule and, later, Yugoslavian. From 1949 to 1979, the largest island, Veliki Brijuni, was the official summer residence of Marshal Josip Broz Tito, Yugoslavia’s “president for life.” This lovely getaway—14 islands and islets—was finally opened to the public as recently as 1983. There’s much to see here, including relics from the Roman and Byzanatine eras, a park-zoo containing zebras, antelopes, llamas and elephants, and a golf course. Brijunska 10, Fazana. 052/525-883 or 052/525-882. www.brijuni.hr. 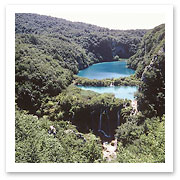 National Park Plitvicla, Jezera
Triple America’s five Great Lakes, shrink them each to manageable size, give them a good cleaning, surround them with a dense green forest and you end up with Plitvice Lakes National Park, Croatia’s top inland natural wonder. This 8000-acre park is home to 16 beautiful, emerald lakes connected by a series of cascading waterfalls stretching five miles through a valley flanked by high, forested hills The park is right on the main highway (E71) from Zagreb to Split. Velika Polijana, 053/751-014 or 053/751-015. www.np-plitvicka-jezera.hr. 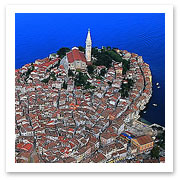 Rovinj
It is hard to imagine how Rovinj could be more beautiful than it is. In a fantastic setting, with centuries-old red-roofed houses clustered around the hill of a former island, Istria’s cultural mecca is crowned by the monumental baroque Crkva Sv Eufemije (Church of St. Euphemia), which has a typical Venetian bell tower topped by a gleaming bronze figure of St. Euphemia. Far below, a wide harbor is crowded with pleasure boats. Throughout the summer, the winding cobbled streets are crowded with vacationers from all reaches of Europe. South of the harbor lies the beautiful landscaped park of Zlatni Rt, planted with avenues of cedars and offering numerous secluded coves for bathing. 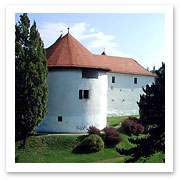 Stari Grad, Varazdin
This impressive castle was built in the 16th century as a state-of-the-art defense fortification against the Turks, complete with moats, dikes, and bastions with low, round defense towers connected by galleries with openings for firearms. Inside, there’s an extensive display of antique furniture with pieces laid out in chronological order and each room representing a specific period. Strossmayerovo Setaliste 7. 042/210-399. www.varazdin.hr. October-April, Tues.-Fri. 10-3, weekends 10-1. 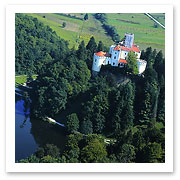 Croatia’s most visited castle took on its present neo-Gothic appearance during the 19th century, but a fortress of some sort or another has occupied this site since the 13th century. Inside, the wood-paneled rooms are filled with period furnishings and family portraits, giving you some idea of how the aristocracy once lived. Trakoscan, 042/796-281 or 042/796-422. www. trakoscan.net. April-September, daily 9-6; October-March, daily 9-4.

Trsat Castle, Rijeka
The medieval castle was built on the foundations of a prehistoric fort. Today it hosts a popular cafe, offering some stunning views of the Kvarner Bay; throughout the summer, open-air theater performances and concerts take place here. Across the street, the pilgrimage church of (St. Mary) was constructed in 1453 to commemorate the Miracle of Trsat, when angels carrying the humble house of the Virgin Mary are said to have landed here. Trsat remains a place of pilgrimage. Frankopanski trg. No phone. Apr.-Oct., Tues.-Sun. 9 a.m.-11 p.m.; Feb., Mar., Nov., and Dec., Tues-Sun. 9 a.m.-3 p.m. 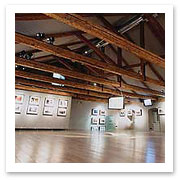