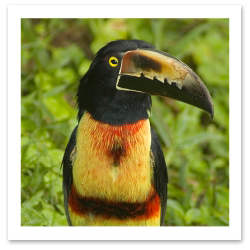 Nevertheless, Manuel Antonio is no undiscovered wilderness. It’s one of Costa Rica’s most-visited attractions, so if you’re looking for an undisturbed natural oasis, this is not it. But what Manuel Antonio does have is great wildlife that can be easily spotted from well-marked trails — a luxury you won’t find in the Amazon. And because animals are so used to humans, this is one of the best places to see them up close.

Attractions
From the ranger station a trail leads through the rain forest behind Playa Espadilla Sur, the park’s longest beach. It’s also the least crowded because the water can be rough. (Riptides are brutal at Playa Espadilla when the surf is up.) Snorkeling, however, is good in the tidal pools.

The coral reefs and submerged volcanic rocks of white-sand Playa Manuel Antonio (photo, below) also make for good snorkeling. The 1/2-mile-long beach, tucked into a deep cove, is safe for swimming.

Espadilla and Manuel Antonio beaches lie on opposite sides of a tombolo, or a sandy strip that connects the mainland to Punta Catedral (Cathedral Point), which used to be an island. The steep path that leads up Punta Catedral’s rocky hill passes a lookout point from which you can gaze over the Pacific at the park’s islands. (Theft is a problem on the beaches; don’t leave your belongings unattended while you swim and don’t leave anything of value in your car.)

Farther east, Playa Escondido (Hidden Beach) is rocky and secluded, but it’s also more difficult to access. Before you head out to Escondido, find out when the tides come in so you’re not stranded. Playa Playita, south of Escondido, is Costa Rica’s only nude beach, though unofficially so. It’s also a favorite of gay sun-seekers.

Trails from the entrance to Punta Catedral and Playa Manuel Antonio are in good shape. Trails farther east to Escondido and Playita are progressively rough. Also note that the park entrance is across a shallow estuary that is so deep when the tide changes in the early morning and late afternoon that you have to pay a boatman (less than $1) to ferry you across it.

Plot your time sensibly. A few hours is sufficient to tour the short trails and see some wild animals, but we recommend an entire day that includes lounging on the beaches, and/or hiking the challenging trails toward Puerto Escondido.

Getting There: From San Jose, 3.5 hours by car, 4 hours by bus, or a 30-minute flight to Quepos, then 15 minutes by car. Entrance at the end of the main road from Quepos. Parking is less than $2.

*Hire a guide — you’ll walk away with a basic understanding of the flora and fauna and see things you probably would have missed otherwise. Hire one at the entrance of the park or through any tour operator in town.

* Beware of manzanillo trees (indicated by warning signs) — their leaves, bark, and applelike fruit secrete a gooey substance that irritates the skin.

* Get here as early as possible — between 7 and 8 a.m. is ideal. Rangers permit only 600 to 800 people inside at a time, and during peak season visitors line up to enter. Early morning is also the best time to see animals. Avoid weekends and major holidays, particularly around Christmas and the week before Easter, when the park is packed.

* Camping is not allowed in the park, and there are no lodges or food.

* Park beaches do not have lifeguards, but that doesn’t mean that swimming is always safe. Riptides are dangerous everywhere except at Manuel Antonio Beach.

* If you want to snorkel, come during the December?April dry season; at other times of the year, heavy rains cloud the water.

Kayaking: Iguana Tours runs sea-kayaking trips ($65) to the park’s islands, which require some experience when the seas are high — and a mellower paddle through the mangrove estuary of Isla Damas, where you see monkeys, crocodiles, and birds.

Snorkeling: Playa Manuel Antonio, the third beach inside the national park, is a good snorkeling spot thanks to calm, clear waters and the varied marine life on and around submerged rocks. Snorkeling is best during the dry season, when tidal pools are clear.

Top Wildlife in the Park:

Monkey Business
Monkeys are undoubtedly the superstars of Manuel Antonio wildlife. It’s nearly impossible to tour the park without seeing at least one species. (Never feed or touch the monkeys: they have been known to bite and they can get sick, or even die from eating improper foods.) Some monkeys are kleptomaniacs, so keep your backpack tightly zipped. The squirrel monkey (mono titi in Spanish), the world’s smallest monkey, is critically endangered, with only 1,200 to 1,500 remaining. Manuel Antonio is one of only two places in Costa Rica (the Osa Peninsula being the other) and three places in the world inhabited by squirrel monkeys.