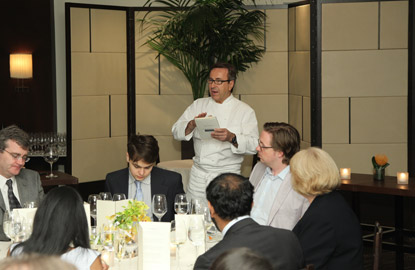 For many travelers, the choice of which airline to fly or where to stay comes down to just one thing: brand loyalty. And more often than not, that devotion isn’t just about opting for consistently comfy pillows or great prices: it’s to achieve the elusive goal of acquiring as many reward points as possible, ideally within the same mileage program.

Certainly, membership miles can be used toward flights, car rentals, or accommodations, but there are some new, more creative ways to "spend" those points. And with so many partnerships between credit card companies and travel brands right now, earning enough points for a truly fabulous experience is easier than ever.

Thanks to its lack of blackout dates and wide range of property options (from W Hotels to the St Regis), Starwood Hotels’ Preferred Guest program has a reputation for being the one of the best-loved hotel reward programs in the business.

Once you’ve earned enough points, you can use to them for everything from access into intimate private dinners with some of the world’s greatest chefs (like Daniel Boulud, pictured above, and Thomas Keller) to tickets to all-access passes at Grand Prix racing tournaments.  The catch is that, since demand for these VIP experiences is much greater than availability, members bid on them using their miles towards the "purchase" at an online auction, but the process is easy and new options are frequently added to the site.

Another program offering a wide range of ways to use points other than for a simple hotel room is the Hilton HHonors Prorgam. These include adventures like parachute jumping and skydiving, the chance to record a song in a professional recording studio, and a session with a portrait photographer. Like Starwood’s options along these lines, everything’s available by an auction bid that’s simple to access on the HHonors website.

You can also use your frequent flier miles to do something good for others.  American Airlines’s long-standing points scheme, AAdvantage, makes it easy to help a variety of children’s charities with its Kids In Need Program, in which members can donate miles to help transport critically ill children and their families to medical care.

Or, AA miles can also be used to purchase identity theft protection, which also includes help replacing credit cards that have been lost or stolen when traveling, which might just come in handy as you’re on road accumulating even more miles.

Although it’s not strictly a travel company, it’s hard to mention using loyalty programs without mentioning American Express’ Membership Rewards, since many cardholders  equate earning miles with traveling (by paying for plane tickets and hotel rooms with their card and using the company’s travel and concierge services).

In addition to being able to use Rewards as payment for Saks Fifth Avenue gift cards and iPhones, the company gives members the chance to buy tickets to lots of popular events, like concerts and sports, before they go on sale for the general public. AmEx also gives cardholders access to its own insider experience offerings, called By Invitation Only, including an upcoming evening with chef Scott Conant and television personality Ted Allen (that’s for Platinum card holders only, $250) and tickets to attend runway shows each season during New York’s Mercedes-Benz Fashion Week.