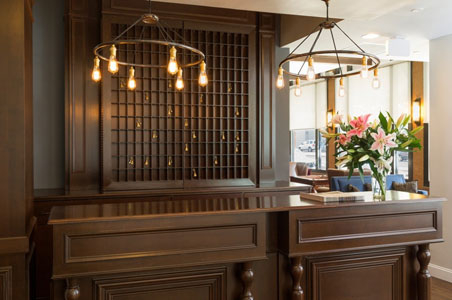 Eclectic yet sophisticated, The Boxer just opened in Boston as a boutique 80-room hotel after a top-to-bottom $3 million renovation of the former Bulfinch Hotel.

Inside the shell of a nine-story building dating back to 1904, many aspects of the décor hearken from this era (and other by-gone eras), such as an 1860 map of Beantown in the lobby, accordion lamps in the guest rooms, and a 1960s photo-mural of the Boston Marathon hung in the fitness center. That the hotel is between North End and Beacon Hill means that everything is within reach, including TD Garden, Charles Street, and the North End’s famous cannoli. 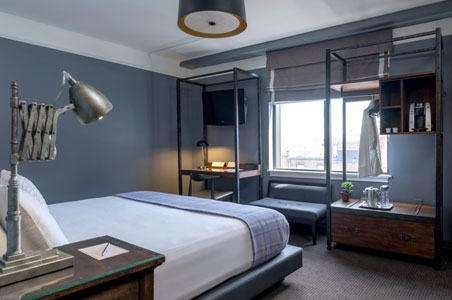 Also in the rooms are tufted headboards, Keurig coffee makers, writing desks, 32-inch flatscreen televisions, iHomes with iPhone docking stations, and free WiFi. Bathrooms are luxurious to the core, with Calcutta marble, and the overall hue in each room regardless of its size is a calming slate blue. (There are seven room categories, including one with wooden-frame bunk beds.) A fisherman’s-knit plaid bed scarf laid across the bed evokes Boston’s waterfront setting and fishing history. 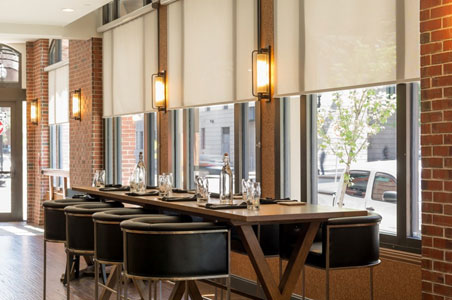 In honor of its first summer, the hotel has unleashed some fun packages that tie into city events, such as "Shakespeare on the Common" (includes accommodations, that famous North End cannoli, a picnic dinner for "The Two Gentlemen from Verona" at Boston Common, and a swan boat ride in the Boston Public Garden, through July 26, 2013) to "TD Garden Concert Package" (includes accommodations, two pre-concert cocktails at Finch, and late check-out).