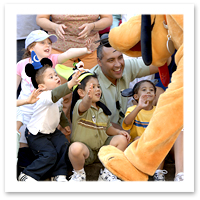 If at all possible, families should avoid the “on-season,” which consists of summers and major holidays. The parks can become so unbearably crowded during these times that you can end up waiting an hour for every ride. If you go during spring or fall you can see twice as much with half the stress.

Walt Disney World can be overwhelming. How can families make it easier for kids to cope?

Here are a few things to keep in mind about visiting WDW:

– Visit during the least crowded times of the year.

– Purchase all tickets and make all car rental, hotel, and dining reservations in advance. Every phone call you make from home is a line you don’t have to stand in later.

– Read up on attractions in advance (buy a tour guide or study the Disney brochures) and let every family member choose three or four must-see attractions per park. Parents often make the mistake of planning the vacation for the kids without consulting them about what they’d most like to do.

– Arrive in the parks early each morning, rest in the afternoon, and return to the parks at night. Disney World can be very tiring and regular rest stops are key.

– Accept that you can’t “do it all.” By reading up in advance you can decide which rides and shows have the most appeal for your particular family. See those first, and anything else you manage to work in is just a bonus. But pushing everyone too hard in some silly quest to “do it all,” especially if you’re traveling with kids, will guarantee at least one tantrum per hour.

Are some kids just too young for Walt Disney World?

Ideally, children should be around six to really enjoy the parks, but many families have kids who vary widely in age, and preschoolers and babies often end up in Disney World because the trip was planned for their older siblings. There are activities that even the youngest children can enjoy but parents traveling with these very young kids will need to do some preplanning. My guide has lots of tips for the parents of babies and toddlers. 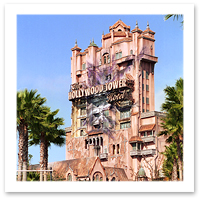 What are your favorite attractions?

I’m a bit of a coaster girl, so I love Rock ‘n’ Rollercoaster at Disney Hollywood Studios. The Tower of Terror (photo, right) is a close second. Soarin’, the new attraction at Epcot, is simply magical, and Kilimanjaro Safaris at the Animal Kingdom is Disney at its best.

What are the advantages of staying at an on-site hotel?

The biggest advantage is proximity to the parks and use of the transportation system. If you have young kids and are staying at one of the resorts on the monorail line, you can take them back to your hotel room for a nap with an easy 10-minute commute. That’s a huge advantage considering that the parks are so large and overwhelming that young kids can poop out fast.

I also think it’s a great perk that you can use your room key to charge everything and you’re presented with one bill at the end of the trip. That’s just a lot easier than carrying cash or credit cards with you all the time, especially if you’re at the water parks. There are other advantages for on-site guests, but to me these are the big three. 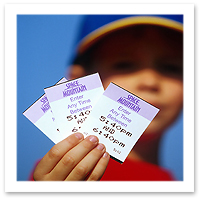 Any tips on how to avoid standing in line for the big rides?

Use FASTPASS, Disney’s system for line management. It’s explained thoroughly in the book, but the basic principle is you can get a FASTPASS for a popular attraction and thus drastically reduce the time you have to spend in line. Let’s say the kids want to ride Space Mountain and you go there at 9 a.m. only to find it’s already posting a 60-minute wait. Insert your theme park ticket into the FASTPASS kiosk and you’ll receive a FASTPASS ticket telling you a time slot when you can return, let’s say between 11:30 and 12:30. If you return at any point within that hour time slot, you’ll be admitted into a much shorter and much faster-moving FASTPASS line. It’s a great perk but, amazingly, many guests simply never use it.

What’s the average cost of a Disney visit?

I always dread this question because there are so many variables that can affect the price — the number of people in your family, where you stay, how fancy you eat, the time of year you’re visiting, etc. But the standard figure is $500 a day for a family of four, and that includes hotel, food, and tickets. I think that’s probably a pretty good average.

Kim Wright Wiley, mother of two, wrote the first edition of Walt Disney World with Kids in 1989. More than 60 visits to the parks later, she’s closing in on the book’s 19th edition, on sale August 2008. When not at the theme parks, she’s at home in Charlotte, NC.