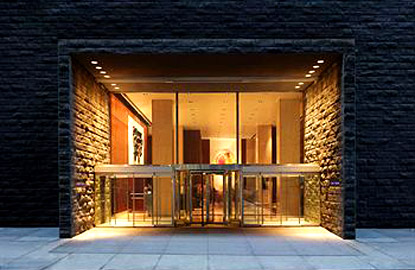 The formwork reportedly collapsed while the workmen were pouring concrete and the machine wasn’t turned off in time to prevent a foot-deep concrete layer from blanketing the hotel cafe’s marble floor. FDNY was quick to the scene to help clean up the mess before it dried. No one was hurt and no permanent damage was done, but it was quite a scene.

In other Le Parker Meridien news, the hotel recently adopted the motel-esque policy of renting rooms by the hour. A cheeky 4-hour stay package, including pay movies and champagne with strawberries, went for $150/four hours around Valentine’s Day.