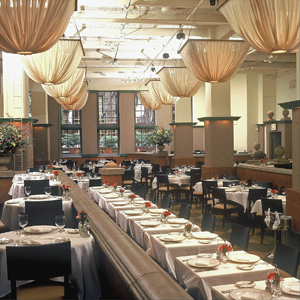 New York is indisputably the restaurant capital of the world. No other city can boast such a profound variety of cuisines, from Aegean to Zambian, and virtually everything in between. But the dining scene in New York City evolves in fits and starts. Most restaurants are ephemeral, with seemingly built-in obsolescence.

Yet some restaurants are really built to last indefinitely, and they do, thanks to excellent management, enduring cuisines, and above all, regular repeat visits from local guests. Here are ten restaurants that have continued to set a high standard for over 20 years—some for a good deal longer:

Chanterelle
Husband and wife David and Karen Waltuck have brought authentic congeniality and inventiveness to high-end French dining. They also lured some of the first throngs of well-heeled diners to SoHo, and then to TriBeCa when they moved to a larger space. With a lot of concentration and care, they have maintained a high standard and created several signature dishes that others have copied, but never equaled, like grilled seafood sausage and rack of lamb with cumin salt crust. They also devised the now-ubiquitous cheese cart. Chanterelle inspires more than fidelity, it arouses ardor. 2 Harrison Street. 212/966-6960. Reservations essential. Lunch Tues. through Sat. Dinner Mon. through Sat., closed Sun.

The Four Seasons
From the butch Grill Room, where “power lunches” were first invented, to the shimmering Pool Room, where grace and serenity were invented, The Four Seasons has never stopped enchanting diners. Some classical standards have never left the menu, like ethereal Dover sole and duck carved tableside. But in recent years, the kitchen has tried to keep apace with new and popular trends, and parts of the menu have an Asian accent. This is one of the few restaurants in town where the sheer sense of puissance is palpable. But the place also has a delightful sense of whimsy, as when birthday celebrants are provided with tufts of pink cotton candy. 99 East 52nd Street. 212/754-9494. Reservations essential. Lunch Mon-Fri. only, closed Sun.

Gotham Bar and Grill
A prominent magazine recently created a chart to demonstrate that nearly every important New York chef passed through the kitchen at Gotham at one point or another. The restaurant’s influence has been as far-reaching as any American restaurant: There isn’t a large city in the country that doesn’t have some variation or direct imitation of Gotham (photo, above). Founding chef Alfred Portale was one of the most important and original pioneers of New American Cuisine, combining unusual ingredients and creating those fabled architectonic towers of food that were also imitated far and wide. A signature dish is Portale’s seafood salad, a whirlwind of squid, scallops, lobster, and avocado dressed to the nines. The three-course $25 prix-fixe lunch is one of the best deals in town. 12 East 12th Street. 212/620-4020. Reservations essential. No lunch weekends.

Il Mulino
New Yorkers in the know have long been willing to wait in long lines and to shell out big bucks at Il Mulino for some of the best Italian food the city has to offer. But insiders know that the place is even better—and far less crowded—at lunchtime. The space is tiny, so dinner reservations are next to impossible to lasso. Portions are large, and they should be, at these prices. Larger veal chops are simply unimaginable, ditto fresher pasta, and the shellfish is superb. The cuisine is prepared in the style of the Abruzzi regions in origin, and that means full flavors, plenty of garlic, and no shying away from chile peppers. Glorioso! 86 West 3rd Street. 212/673-3783. Reservations essential, closed Sun.

La Grenouille
During the last year or so, Manhattan lost four of its five oldest and most famous classic French restaurants: La Caravelle, La Cote Basque, Lutece, and Le Cirque all shuttered. Only La Grenouille remains. In congruence with its classic stature, this is one of only two restaurants on this list that still requires a jacket and tie (21 Club is the other). The flower arrangements here are (almost) as spectacular as the food. The eponymous frog legs Provencale and perfect pike quenelles Lyonnaise are perennial favorites, but the menu has been updated to include a few more modern classics, like salmon and fennel tartare. The souffles are the stuff of legend, and the wine list offers nearly 120 labels and 12,000 bottles of the best French and American wines. 3 East 52nd Street. 212/752-1495. Reservations essential, closed Sun. and Mon.

Le Bernardin
You can count on one hand the number of restaurants in town that received four stars from the New York Times when they were only three months old. And most veterans agree that Le Bernardin has just gotten better and better over the years. Few if any American restaurants have received such ecstatic and ongoing praise. Acclaimed Executive Chef Eric Ripert amply demonstrates that when it comes to seafood, less is much, much more. The all-seafood menu (well, there’s a squab and a lamb dish “upon request”) is divided into almost raw, barely touched, and lightly cooked, and the preparations are no less remarkable, from stunningly simple (halibut poached in saffron broth) to sublimely imaginative (baked lobster with a citrus-mango emulsion, endive, and sheep’s milk ricotta gnocchi). 155 West 51st Street. 212/554-1515. Reservations essential. No lunch weekends, closed Sun.

Oyster Bar and Restaurant
Stepping into this enormous, sweeping tile-vaulted grotto is like taking a giant step back in time—to 1913, when the place opened for business. Not much has changed about the space, despite a devastating fire in 1997, after which the restaurant was painstakingly restored. Oyster Bar veterans know that it’s best to stick to the raw bar, which is pretty easy, given that there are about 28 varieties of oysters and clams and all kinds of smoked fish available on a given day—an unsurpassed selection. But come to think of it, the oyster pan roast is also unsurpassed. The beer and wine list is impressive, too. Grand Central Terminal, Lexington Avenue. 212/490-6650. Reservations suggested. Closed Sun.

Peter Luger Steak House
The Porterhouse palace has been rated far and wide the best New York steak house for 20 years in a row. There’s no menu unless you insist on one, there’s no lobster, the tab is cash-only, and the wine list is as spare as the space, but none of that matters when you taste your first bite of Porterhouse, which is served for two, three, or four. The fresh short loins are dry-aged on the premises. The lamb chops and the salmon are mighty fine, and the French fries are perfection, but it’s all about that Porterhouse. The raves are absolutely unanimous. Try to save room for state-of-the-art cheesecake, if you possibly can. 178 Broadway, Brooklyn. 718/387-7400. Reservations essential, lunch and dinner served daily.

21 Club
This former speakeasy has the most impressive history of any extant New York restaurant. The high and the mighty have been darkening its portals for many long decades. The restaurant has been in more movies than any other restaurant in town. To this day, celebrities are there every night. It’s an unusually clubby atmosphere, and if you don’t “belong,” you’ll be on the periphery, but what a periphery it is! There are actually two restaurants—the Bar Room and The Upstairs—The wine list is staggering, and you can’t help but inhale all the testosterone that courses through the place while you peruse it. The menu is solid American fare that never fails to please. 21 West 52nd Street. 212/582-7200. Reservations essential, closed Sun.

Elaine’s
Service and food have slid irretrievably. Some celebrities still go there, but you can’t eat celebrities.

Fraunces Tavern
Yes, George Washington ate here, but he probably hated it too.

One If By Land, Two If By Sea
The food is highly overpriced and underflavored.

Sardi’s
Perhaps the most dramatic decline on Broadway. Perhaps.

Smith & Wollensky
The suffocating, windowless atmosphere is stuck in the muddy 1950s. There are about 75 much better steakhouses, and most everybody knows it.