It’s been 150 years since the first shot was fired on Fort Sumter, prompting the start of the Civil War. The Civil War Sesquicentennial, which gets underway this month and lasts through April 7, 2015, will commemorate this tumultuous period in U.S. history at famous battlefields and important sites nationwide. Check the National Park Service’s Sesquicentennial Site for a schedule of major events and exhibits, or follow Beglan O’Brien, their (fictional) Civil War correspondent on Twitter, as he tweets about historic events in 140 characters or less. Our timeline covers the events leading up to the war through the surrender at Appomattox Court House and the assassination of Abraham Lincoln. 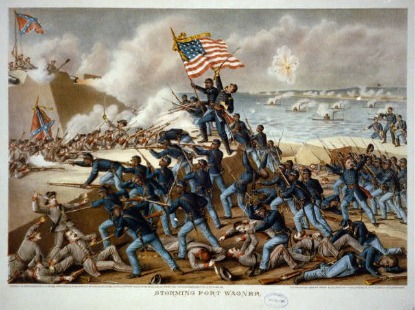 Southerners interpret Abraham Lincoln’s 1858 presidential campaign "House-Divided" speech as a promise of war: "A house divided against itself cannot stand. I believe this government cannot endure permanently half-slave and half-free. I do not expect the Union to be dissolved—I do not expect the house to fall—but I do expect it will cease to be divided. It will become all one thing or all the other." Abraham Lincoln wins the presidential election in November 1860. Outraged by Lincoln’s victory, South Carolina, Mississippi, Florida, Alabama, Georgia, Louisiana, and Texas all secede from the Union by February 1861. The Confederate States of America is formed with Jefferson Davis as President. On March 4, Lincoln’s inaugural address in Washington, D.C. calls for peace.

On April 12, 1861, Confederates under General Pierre Beauregard fire the first shots of the American Civil War on Fort Sumter in Charleston, SC. Five days later Virginia secedes from the Union; Arkansas and North Carolina follow and by June 1861 Tennessee becomes the 11th and final state to secede. A month later, the first Battle of Manassas, VA, also known as Bull Run, contradicts most Americans’ belief the war will only last a few months. The following September 1862 at Antietam, MD, Confederate General Robert E. Lee fails in his invasion of northern soil against General George McClellan. Lee wins at Fredericksburg, VA in December 1862 with only half the casualties of the Union forces. On January 1, 1863, President Lincoln issues the Emancipation Proclamation, which declares "that all persons held as slaves" within the seceded states "are, and henceforth shall be free."

Three strategic victories prove crucial to the north’s eventual victory over the south. The July 1863 battle of Gettysburg is General Lee’s last major offensive; 170,000 men fight over three days with 51,000 casualties, after which Lee retreats to Virginia. The following day, July 4, Vicksburg, MS, surrenders to Union forces laying siege under the command of General Ulysses S. Grant. For the north, taking Vicksburg soon means controlling the Mississippi River south to New Orleans, cutting the Confederacy in half. In August, Union forces march into Chattanooga and seize its river, railroads, and a major Confederate supply center. Chattanooga will become the crucial supply center for Union troops advancing south toward Atlanta.

To head off a counteroffensive on Chattanooga, in September 1863 Union forces march for the first time into Georgia where Confederate forces have retreated. Morale is low among southern forces after the summer’s defeats, but a chance skirmish launches what will be the largest battle and final Confederate victory in the war’s western theater. The two-day clash ends with Union forces rapidly retreating north to safer ground at Chattanooga. Confederates are ecstatic, but this battle does little but buy the south time. One month later, U.S. General William Tecumseh Sherman takes command of the Army of the Tennessee and sets his sights on Atlanta.

Southern attempts to hold back advancing Union forces over the 110 mi from Chickamauga to Atlanta fail. By the summer of 1864, less than a year after Chickamauga, General Sherman’s forces close in on Atlanta, the industrial heart of the Confederacy. In July 1864, Sherman’s forces try to overtake southern troops barricaded within the city limits. When outright attack fails, Union commanders lay siege to the city. With Atlanta’s southern railroad supply route cut off at Jonesboro, by September Atlanta mayor James Calhoun is forced to hand over keys to the city. After Atlanta falls, Sherman evacuates and burns the city. Victory at Atlanta reinvigorates support for Lincoln who is reelected in November. That same month, Sherman’s men begin their devastating "march to the sea"; they take Savannah, GA, by Christmas.

Confederate States General Robert E. Lee surrenders to U.S. General Ulysses S. Grant at Appomattox Courthouse, VA, on April 9, 1865, ending the Civil War. On April 14, President Lincoln is assassinated at Ford’s Theater in Washington, D.C., by John Wilkes Booth. The Thirteenth Amendment to the U.S. Constitution is ratified on December 6, stating: "Neither slavery nor involuntary servitude, except as a punishment for crime whereof the party shall have been duly convicted, shall exist within the United States, or any place subject to their jurisdiction."