News Apeksha Bhateja It's a Tie: The 2 Most Annoying Airline Passenger Behaviors of 2022
NewsBike the City: Boston, New York, and Washington D.C. 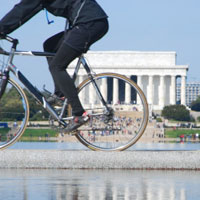 Think a visit to an East Coast city means miles of walking or being stuck in traffic to get around between sites? Think again: Boston, New York, and Washington, D.C. all offer fantastic two-wheeled exploring experiences—and they’re perfect for a full or half-day bike tour. Each of these self-guided routes can be traveled uninterrupted, or you can easily pop off the bike path, lock up your ride, and enjoy some of the cities’ top attractions.

The Dr. Paul Dudley White Bike Path—or the Charles River bike path to locals—hugs Boston’s main waterway on both the Boston and Cambridge sides; the full loop is nearly 18 mi long and provides a variety of scenery, from cityscapes to leafy views. The best parts, though, are the two several-mile-long stretches that go past Harvard Square and Boston’s Back Bay. If you’re in town between late April and mid-November, however, save your bike ride for Sunday between 11 am and 7 pm when Memorial Drive (on the north side of the river in Cambridge) is entirely car-free for about two miles from Western Avenue all the way west to Eliot Bridge (past Harvard Square).

If you’re biking on the Cambridge side of the river, stop at Longfellow House, Harvard Square, and the Museum of Science.

On the Boston section, it’s more about the foliage and outdoor spaces; catch a free show at the outdoor Hatch Memorial Shell near the Charles/MGH T stop on the red line, take a free sailing lesson at Community Boating Inc., or enjoy a paddle with Charles River Canoe and Kayak Center.

In Harvard Square: Cardullo’s (6 Brattle St.) will make you fancy sandwiches and has foreign candies and chocolates; Mr. Bartley’s Burger Cottage (1246 Massachusetts Ave.) is the place for, yes, burgers.

In Beacon Hill: Panificio Bakery (144 Charles St.) is good for classic picnic fare like overstuffed sandwiches and egg salads. The Sevens Ale House (77 Charles St.) is a great stop for a hoppier pick-me-up, and they have good pub fare, too.

While not directly on the bike path, these rental locations are just minutes’ walk from the water. In Harvard Square try ATA Cycle (1773 Massachusetts Ave.) and for Back Bay, Back Bay Bicycles (362 Commonwealth Ave.)

This city’s most famous green space, Central Park, has a popular loop road for biking, a bicycle rental agent at every turn, and is car-free much of the time. For a more local scene, get off the tourist circuit and onto the Hudson River Greenway, which runs along the entirety of Manhattan’s west side. Part of the city’s current initiative to increase green spaces and biking corridors, the Greenway’s Hudson River Park section runs 5 miles from 59th street south to Battery Park. The path takes you past varied attractions and amazing water vistas. If possible, we recommend ending the day near Battery Park (its southern terminus) for the best sunset views of New York Harbor.

If you head from north to south, the battleship-turned-museum Intrepid Museum is a good stop even before you pick up your bike. Once your ride is underway, much of the route features outdoor art and unique built-in sculptured seating—an attraction in itself.

Chelsea’s art galleries, sprinkled between 28th and 18th streets from 11th Ave. east to 9th Ave., are usually open Tuesday through Saturday, 10 AM to 6 PM.

The High Line, a converted elevated railroad bed, is one of the best new outdoor spaces in the city and, if it’s not too crowded, can be the perfect spot for a picnic lunch; we recommend entering at 20th street and heading south. Note, that bikes aren’t allowed so you’ll need to lock your bike at street level and double back to pick it up.

In Chelsea: Chelsea Market (75 9th Ave.), in the old Nabisco building and hallowed birthsite of the world’s first Oreo cookie, is home to some fantastic take away-friendly fare, from gourmet sourdough sandwiches to Thai food.

On the Hudson: The Frying Pan at Pier 66 Maritime is open from May to October; have a beer and classic pub fare on the floating recovered lightship itself, or stick to the slighly less rocky main pier’s seating area.

Bike and Roll is located at Pier 84 (near 44th St.), and you can rent here and drop off at the company’s other locations in Central Park and Battery Park.

By combining a 3-mi tour of the National Mall (including a loop around the Tidal Basin) with a quick 2-mi peddle over to Georgetown along part of the C&O Canal Towpath, bikers can explore D.C.’s iconic monuments, its green spaces, and even a historic neighborhood in a single ride. In the spring, the National Mall is cherry blossom heaven; in the fall, leaves are ablaze along the C&O Canal Towpath. Whatever the season, you’re likely to have some very good people-watching opportunities in Georgetown.

It’s best to start your tour near the Mall; after picking up your bike (or even beforehand), you might want to explore one of the many museums here. If you’re keen to stay outdoors, just make a loop to admire the facades and stop at the National Gallery Sculpture Garden. Next, head west to the Washington Monument. You can take a quick northerly detour to the White House; otherwise, continue west to the Constitution Gardens, the Vietnam Veterans Memorial, and the Lincoln Memorial. From here, head south to the Tidal Basin; you can make the full loop and include the Jefferson Memorial on the south bank, or just have a rest and watch construction progress on the Martin Luther King, Jr. Memorial.

Aim your bike toward the Potomac and pick up the dedicated waterfront bike path that will take you about a mile to the beginning of the C&O Canal Towpath (on the left). If you’re feeling ambitious, you could take this all the way to Maryland—but we suggest ducking in to historic Georgetown first to explore the Exorcist Steps (yes, the ones from the movie), the Masonic Lodge, and the Vigilant Firehouse, all right on the Towpath.

On the Mall: With so many museum cafes around, a hot dog from a street cart is not your only option. The best of the bunch is the Mitsitam Cafe in the Museum of the American Indian. The National Gallery’s Sculpture Garden has Pavilion Cafe, which offers indoor and outdoor seating; you can get sandwiches to go.

D.C. Bike and Roll (1100 Pennsylvania Av. NW, rear plaza) is an easy walk north of the Mall; they also offer bike tours. D.C.’s new bike-share program, SmartBike DC , is now up and running; rental kiosks are centrally located, and you can drop off at a kiosk other than the one you picked up at.