Squeezed between the Andes and the Pacific Ocean, Chile has beaches that draw sun-worshippers and roaring rivers for adventure travelers. Fishing aficionados head south to the Lake District, while armchair archeologists are attracted to the 5,000-year-old mummies of the Atacama. In some places the 320-km (200-mi) territorial limit is wider than the country itself, making Chile as much water as earth. Here are the best places and sights to inspire your perfect Chilean itinerary. 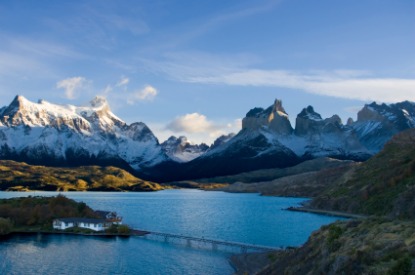 Torres del Paine
The Torres del Paine, part of the Paine Massif, an Eastern spur of the Andes rising dramatically above the Patagonian steppe, are three granite towers that form the centerpiece of the Torres del Paine National Park in Region XII. In addition to the towers, the park has breathtaking lakes, glaciers, valleys, and forests. Pumas, guanacos, and a wide variety of birds are also found there.

Valle de la Luna
Part of the Cordillera de Sal, formed where the Andes meet the Atacama Desert, the Valle de la Luna is aptly named: its sand and rock formations create a remarkably moonlike landscape. Come at sunrise or sunset, when a multitude of colors splashes across the sky. It’s an indescribable experience to watch the full moon rise over the valley.

Volcán Villarrica
On a clear day, the perfectly cone-shaped, snow-covered Volcán Villarrica is visible from nearby Pucón, one of the principal destinations in the Chilean Lake District. Adventurous tourists can climb the active volcano, peering into the lava lake within its crater at the summit.

Chiloé’s Churches
In addition to its palafitos (brightly colored waterfront homes on wooden stilts) and curanto, Chiloé is best known for its 150 wooden churches, which were built by Jesuit missionaries during the colonial period. After declaring the churches a World Heritage Site in 2000, UNESCO has been helping to restore many that were damaged or are in disrepair. One of the most beautiful and oldest examples is the Iglesia de Santa María de Loreto, on the small island of Quinchao. The church dates from 1706, and its deep-blue ceiling is adorned with gold stars.

Pablo Neruda’s Houses
Isla Negra, La Sebastiana, and La Chascona are the three houses of Chilean Nobel Prize–winning poet Pablo Neruda. They are located in Isla Negra (45 minutes south of Valparaíso), Valparaíso, and Santiago, respectively. Given Neruda’s eclectic taste and passion for collecting objects, each is distinctive and well worth a visit.

La Moneda and the Plaza de Armas, Santiago
La Moneda is Chile’s presidential palace, though the president does not reside there. Time your visit to watch the changing of the guards at 10 AM every other day in the Plaza de la Constitución. Also look for the statue of former president Salvador Allende in the southeast corner of the Plaza. Many believe Allende committed suicide inside La Moneda during the military coup in 1973, although others contend he was assassinated. The Plaza de Armas is the nearby bustling square at Compañía and Estado flanked by impressive buildings such as the Correo Central (central post office), the Municipalidad de Santiago (city hall), and the Catedral (cathedral).

Central Coast Beaches
Chile’s beaches are a major draw for international and domestic tourism alike. During the summer months of December through March, families from all over Chile come to relax along the windswept coast near Viña del Mar and Valparaíso, sharing asado (Chilean barbecue) and enjoying the bounty of fresh seafood provided by the freezing waters of the Humboldt current. Be sure to include this area on your itinerary if you spend any length of time in Santiago.