News Annette Richmond Meet the Activists Reshaping the Travel Industry for the Better
Home  >  News   >   Chicago: Walk of the Town

Chicago: Walk of the Town

For the next few weeks, Chicago will be wrapped in the warm caress of Indian Summer — the perfect time to take a long stroll amid the city’s architectural highlights and natural wonders. Our path runs from the Chicago River to Lake Michigan, cutting across the Loop — Chicago’s business center, historical heart, and home to its greatest buildings and parks. 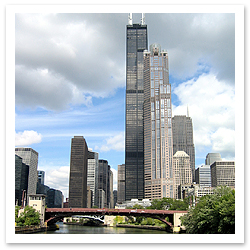 Start at Union Station. The beaux arts Great Hall, a cathedral of transportation, was built in the early 20th century, when Chicago was the center of America’s railroad system (check out the vaulted skylight ceiling). You may experience déjà vu if you’ve ever seen The Untouchables, which was filmed here. Leave the station via the Jackson Boulevard exit.

Back on the street, head east until you’re in the middle of the Jackson Boulevard Bridge, between Canal Street and South Wacker Drive. Directly below is the South Branch of the Chicago River; once a sewage-laden mess, it’s now one of the city’s crown jewels (Chicago reversed the river’s flow in 1900 — something that would still be considered an engineering feat today). Looking north, toward the Adams Street Bridge, the view is equal parts Seine and steel.

This is a proud city, and if you look up you’ll see one reason why. The Sears Tower (1973) is the tallest building in North America, and one of the tallest in the world. If your neck starts to hurt from craning up, take an ear-popping elevator ride to the 103rd floor Skydeck (entrance on Jackson). It’s $11.95, but can you really put a price tag on a vista that encompasses the entire city and parts of four states (Illinois, Indiana, Wisconsin, and Michigan)? For a free thrill, check out Alexander Calder’s moving sculpture The Universe in the lobby on the Wacker Drive side. 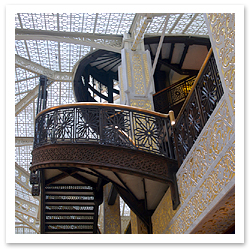 Back on Jackson, continue east for two blocks and hang a left on LaSalle. Continue north, but do turn around and look back once you cross Quincy Street. You’re staring down the LaSalle Street canyon, a classic Chicago cityscape that evokes midtown Manhattan. The art deco beauty at the end is the Chicago Board of Trade (1930), the heart of the city’s financial district and its tallest building until 1965, when it was surpassed by the Richard J. Daley Civic Center (at Randolph between Clark and Dearborn Streets; the city’s famous Picasso sculpture sits in its plaza).

Size isn’t everything. At 209 South LaSalle Street you’ll find the 11-story Rookery Building, an 1885 Burnham and Root classic built with then-modern techniques like steel-frame construction. The Rookery has withstood the test of time quite well — it’s the oldest high-rise still standing in this city of skyscrapers. The exquisite lobby (photo above) is Frank Lloyd Wright’s handiwork, restored to its 1907 elegance.

Continue on LaSalle until you get to Adams Street. Take a right and proceed one block to the Federal Center and Plaza, home to Alexander Calder’s red Flamingo, which presents a bright curvy contrast to the plaza’s dark, linear buildings.

Proceed down Adams until you see the lions on the front steps of the Art Institute (1893). Linger if you can, but if a blitz tour is in order be sure to see Marc Chagall’s America Windows, Grant Wood’s American Gothic, Edward Hopper’s Nighthawks, Picasso’s The Old Guitarist, Monet’s stacks of wheat paintings, and Georges Seurat’s A Sunday on La Grande Jatte. 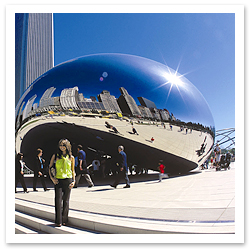 The Bean to Buckingham

Say goodbye to the lions and head north on Michigan Avenue. Once you cross Monroe Drive, you’ll see Millennium Park on the right. Your first stop is Juame Plensa’s Crown Fountain. You won’t be able to miss the two 50-foot-high glass block towers that project huge video images of a broad cross section of Chicagoans. Walk a little farther north and you’ll see Anish Kapoor’s delightful Cloud Gate (you may hear people refer to the sculpture as “bean,” since it resembles a giant mirrored jellybean). Check out the great skyline views reflected in the outer surface, but be sure to walk into the center too — it’s like being inside a reflective cave.

If you look east you’ll notice a huge trellis over a grassy field. Walk into the middle and you’ll see Frank Gehry’s Jay Pritzker Pavilion. The architect’s band shell is an explosion of steel, severe but soft, looming yet delicate. Catch a concert here if you can — better yet, you may stumble upon an afternoon symphony rehearsal, the perfect soundtrack for a picnic lunch.

Gehry’s band shell is book-ended by two of Chicago’s architectural all-stars. On the left, the unique diamond-shaped top of the Smurfit-Stone Building (1983) is one of the city’s unofficial message boards, cheering on the rare Chicago sports team that makes it to a championship. It’s also known as the Adventures in Babysitting building for the pivotal role it played in that movie’s climactic scene. The AON Center (1972; originally the Standard Oil Building), to the right of the band shell, may look a little bland, but it’s the second-tallest building in the city. The building’s original marble façade couldn’t withstand Chicago winters, and between 1990 and 1992 the entire façade was replaced piece by piece with the current granite sheathing. 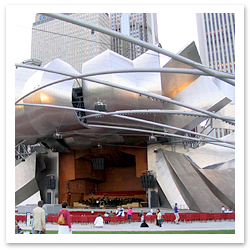 When you’re done enjoying Pritzker Pavilion, walk back to Monroe Drive and turn left. When you get to Columbus Drive, walk south. You’re now in the heart of Grant Park, Chicago’s front yard. There aren’t a lot of attractions in the park, and that’s intentional. This valuable piece of lake-front real estate was set aside for public use in 1835, and its openness has been vehemently protected since then. Unless there is a concert or festival taking place (some of the city’s best are held here, including the Taste of Chicago and the Chicago Blues Festival), the main activities are strolling through rose gardens and along pathways modeled after European parks, picnicking, softball, or gazing at the glorious skyline views.

As you walk south through the park, you’ll notice what appears to be a geyser —Buckingham Fountain (1927). This double-sized replica of a fountain at Versailles is the park’s focal point and one of the city’s architectural symbols (at night the waters are illuminated with colorful lights). Visit near the top of the hour, when the stream shoots up 150 feet for 20 minutes. 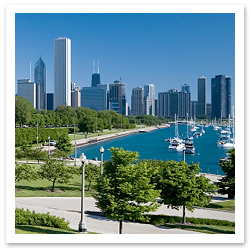 This walk is roughly three miles long, from Union Station to the Adler Planetarium. You can do it in 90 minutes, unless you linger, visit the Art Institute, or decide to have a picnic in Millennium Park. If time is limited, take a cab from Millennium Park to the Adler Planetarium, shaving off more than a mile and a half of foot time (ask your cabbie to drive by Buckingham Fountain on the way). If you’re doing the entire walk, bring a light jacket or a sweater as the lakefront can get chilly.