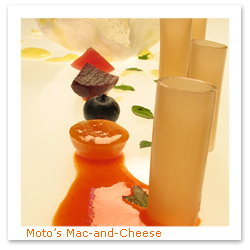 Just three years ago, three young chefs, each a veteran of local icon Charlie Trotter’s kitchen, took a simultaneous gamble on the sophistication and daring of Chicago diners, unveiling cutting-edge menus the likes of which the Windy City had never seen before. Though a visit to their restaurants — Alinea, Moto, and Avenues — demands an adventurous palate and serious commitment of time and money, all three places instantly thrived.

The chefs leading these restaurants — Grant Achatz, Homaru Cantu, and Graham Elliot Bowles — have brought an American touch to techniques and ideas first explored and popularized in Europe, toying with devices and chemicals more suited to a lab than a kitchen. This marriage of science and cooking is known as molecular gastronomy. Though following in the footsteps of chefs like Heston Blumenthal in Britain and Ferran Adria in Spain, the Chicago pack prided themselves on being trailblazers, not imitators. “For Picasso to do something that looked like a Dali would’ve been a sham,” says Cantu. “It’s the same thing in these restaurants. There’s a certain amount of pride in originality.”

It didn’t take long for the national press to take notice. “One chef is unique,” says Bowles. “Two could be a fluke, but three guys doing this stuff in the same city, maybe something is going on.” Writers from GQ, Gourmet, The New York Times, and Vogue gushed over Chicago’s new “sci-fi” cuisine. The city, they wrote, had become the capital of avant-garde food in America. 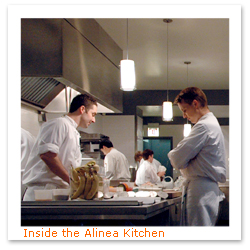 Born into a restaurant family in Michigan, Achatz, who turned 30 two years before his colleagues, is the triumvirate’s senior statesman. After working at Charlie Trotter and at Thomas Keller’s French Laundry in Napa, he began experimenting with molecular gastronomy at Trio in the Chicago suburbs. In 2005 he launched Alinea, his first solo project just up the block from the Steppenwolf Theatre. The restaurant was named the best in the country by Gourmet barely a year after it opened.

There are two dining options at Alinea — long and longer. “When we first opened we were serving 28 courses,” says the chef. “People were fatiguing. When you cross over four hours you’re getting into dangerous territory.” Tiny one- to four-bite courses flow one into the next, with sweet dishes not just ending the meal but also interrupting it midway. “It breaks the monotony,” Achatz says. Though ingredients are as likely to be flash-frozen on a stainless steel “negative grill” (at minus 30-degrees Celsius) as seared on an old-fashioned Japanese charcoal barbecue, not much of this food (served on pedestals and prongs) will look familiar. In the kitchen you’ll also find an immersion circulator (for cooking vacuum-sealed food “sous-vide”) and containers of calcium lactate and sodium alginate (for encasing liquids in a yolk-like skin so they explode when you bite them). 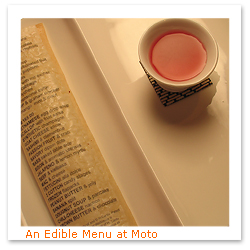 Cantu, the most wildly experimental and scientifically minded of the Chicago chefs, worked in kitchens up and down the West Coast before landing at Charlie Trotter, where he eventually rose to the position of sous chef. Moto, which opened in 2005 on a desolate stretch of the city’s meatpacking district, is equal parts restaurant and mad scientist workshop. The chef, who holds some two-dozen food patents, sells innovations perfected in the restaurant’s basement kitchen to corporate and government clients (including NASA).

The kitchen at Moto resembles a James Bond villain’s lair. When the industrial laser is turned on, protective-goggle-clad chefs work in near darkness on orders transmitted by a computer-generated voice. The daily changing prix-fixe menus (in 5-, 10-, or 20-course options) are printed to order in edible ink on soy-based paper (one of the chef’s many patents). Here theatricality and trompe l’oeil presentations rule. “When you order a tasting menu it’s like going out for a night at the opera,” Cantu says. “You don’t get to choose act one, scene five; you get the entire production as the composer intended you to see it.” You might encounter chemically treated lychee puree, mimicking pasta dough, molded into translucent rigatoni. Or a new wave “nitro” sushi roll made with liquid nitrogen — treated tofu skin that emits cool smoke through your mouth and nose. 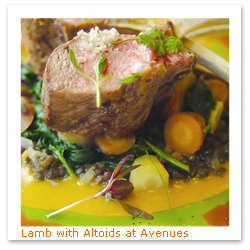 After making his professional debut at the pastoral Jackson House Inn in rural Vermont, Bowles worked alongside Cantu at Charlie Trotter. The chefs, who started two weeks apart, became good friends. Later Bowles returned to the Jackson House where he first experimented with molecular gastronomy (and where Food & Wine named him one of America’s best new chefs). Just as his colleagues were launching their own places, he landed his current perch at the flagship restaurant of Chicago’s Peninsula Hotel.

Since taking over Avenues, an understated stage in a luxury hotel, Bowles’ wildest impulses have been reigned in considerably. “I used to be much more about being different for different’s sake,” he says. “Not pushing the envelope but tearing it up.” Though his food is recognizable, it remains thought provoking — and delicious. Avant-garde techniques are added as one ingredient among many. You might find, for example, an Altoids jus served with rare tender lamb (“It’s whimsical, but still makes sense,” Bowles says), almond soup poured over sage marshmallows, or smoked ice cream (the sugar and eggs are smoked beforehand) served atop hand-cut steak tartare (it makes the whole dish taste like bacon).