There’s a secret among in-the-know New Yorkers when it comes to a fast, cheap, and interesting lunch that surpasses the average pizza, burger, and hot dog fare: food carts and trucks. While carts can be found on practically every corner of the city, a handful are worth seeking out for noteworthy eats and recession-friendly prices to match. 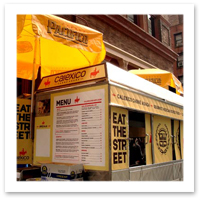 Near the corner of Wooster & Prince Sts.

Started by three brothers from Southern California, Calexico has fantastic tacos, perfect for a quick lunch while sightseeing in Soho. For $4 or less, all topped with the requisite cabbage, cilantro and lime, you have your choice of four fillings: marinated and grilled asado hangar steak (incredible) or chicken, chipotle pork, or veggie black bean. Burritos are stuffed with the same for $6-$8. Grab an order of guacamole or chips and salsa, just $2 each, and you’ll have a complete Mexican meal. The best and closest spot to chow down is the nearby park on the corner of Spring and Mott. You can also find a second Calexico cart at Broadway and Broome.

Berlin-born Rolf Babiel has spent nearly a quarter of a century serving up sausages from his pushcart. Aside from having the only German food cart in the city, he’s equally well known for his “order by car” shtick. Examples: a knockfrank ($3) is a Volkswagon, bratwurst ($5.50) is a Mercedes, and the popular Berliner curry wurst is a Porche. On weekdays, Babiel and his brother Wolfgang sling these puppies on a crusty bun, topping them with kraut, onions, and mustard. Take one of their ingenious red-and-white foldout trays over to the steps of St. Patrick’s Cathedral and enjoy.

Want big Texas BBQ taste from a tiny beige cart? Daisy May’s is your go-to for what’s been called the best BBQ in midtown. There are three sandwiches on the menu—Carolina pulled pork ($8), Texas chopped beef brisket ($8), and BBQ chicken ($7)—and one big bowl of stick-to-your ribs Texas-style chili ($6). For an extra buck, add Cajun dirty rice and beans, and wash the whole thing down with a cup of sweet tea ($3).

Bangledeshi native Meru Sikder grills up spicy and flavorful chicken tikka, vegetable biryani, and kebab combos (all about $6), but the real prize is the burrito-like rolls called kati. Wrapped in light and flakey chapati, or Indian flatbread, there are four options: the King Koti (chicken tikka), the Buradi (chicken with spicy mint habanero sauce), the Chennai (lemongrass chicken with sweet chili sauce), and for those who prefer mild, the Prune, (with grilled onions). Get any two for just $4. There’s also a potato-filled veggie version available.

It’s hard to miss the long lines hugging the curb at the corner of 53rd and 6th, the location of the famous Halal carts, but make sure to chose the right one—look for the guys wearing yellow shirts and passing out yellow bags. One of the best deals in town—a huge, steaming portion of chicken, beef, or lamb, with rice and pita for $6, or a sandwich for $4—isn’t just a lunchtime favorite. The carts stick around ’till late-night, making their Middle Eastern standards a satisfying after-theater or after bar-hopping snack.