News Apeksha Bhateja Europe's Airports Are Chaos This Summer. And Now There's Another Problem
Home  >  News   >   Channel Your Inner Caveman at a Cave Hotel in Cappadocia

Channel Your Inner Caveman at a Cave Hotel in Cappadocia 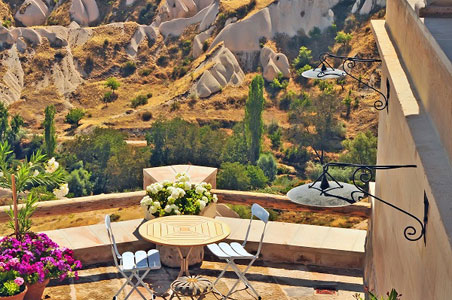 Cascading down the side of the ancient village of Uçhisar, Argos in Cappadocia offers guests a rustic, yet refined, escape from the modern world, in a setting I like to call "caveman chic". Guests can anticipate this tantalizing trifecta: uninterrupted views of the otherworldly volcanic-sculpted landscapes that define Turkey‘s Cappadocia region; plush cave hotel rooms; and an authentic onsite history that would tickle any archaeologist pink. Dating back some two millennia, the grounds served as both an ancient Byzantine monastery and a lodge for camel caravans running the Silk Road route.

Argos opened its doors in 2010, following an extensive 15-year excavation and restoration project that saw these derelict ancient cave dwellings reborn into a sophisticated and imaginative modern hotel, with cave cocoons converted into plush guestrooms. In turn, the hotel’s charms have merited plenty of buzz (winning a spot on Fodor’s 100 Hotel Awards list last year)—and to meet its growing popularity, the property is readying for a frenzy of expansions slated throughout next year.

Guests arriving in 2013 can expect major enhancements: some dozen new hotel rooms, a private dining and wine-tasting area set by the adjacent valley floor, and a sparkling new spa. And in October, the hotel launched in-room massage services. (Argos is also intent on gaining permissions from conservationists to build a biological swimming pool into the valley below, though the launch date is pending approvals.) 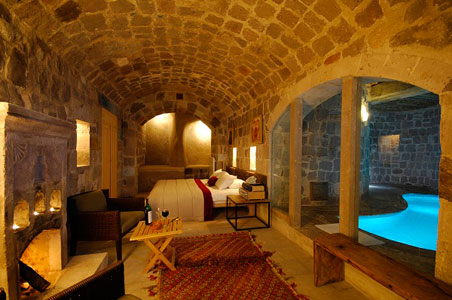 Billed by the hotel as an "ancient village with a reception desk," the current complex of 42 spacious yet intimate, rooms and suites spill out over the hillside, in a maze of sun-drenched balconies and courtyards, all overlooking Pigeon Valley’s rock-hewn formations and the distant peak of Mount Erciyes (a now-dormant volcano that helped shape the strange lunar-like lava landscapes we see today). A team of gardeners busily toil away, sprinkling the arches, vaults, and gardens of the grounds with a changing palette of dried sage, lavender, gourds, and more, as the seasons turn over.

Some guestrooms are carved into caves while others are set in more modern buildings, with interiors offering a unique mix of stonework, wood finishings and beams, and roaring fireplaces—each tucked-away nook an inviting home base. The handiwork of Turkish artisans is displayed in local fabrics, handmade rugs, and decorative objects. Even the rooms set in caves don’t forego modern creature comforts. Expect Molton Brown bath amenities, 24-hour room service, free WiFi, and pre-loaded iPods (though there is no TV). The Superior Splendid Suites are primed for romance seekers, with private en-suite swimming pools.

A subterranean system of tunnels and wine cellar caves (once a working winery for the monastery, the space will soon host wine-tastings), speak more to the antiquity of the place; complimentary tours can be arranged at the front desk. Be sure to pop into the hotel’s Bezirhane event space, a 2,000-year-old underground stone monastery with high domes, giant pillars, and excellent acoustics that is used for special events and cultural and musical performances (concerts are held regularly in summer). 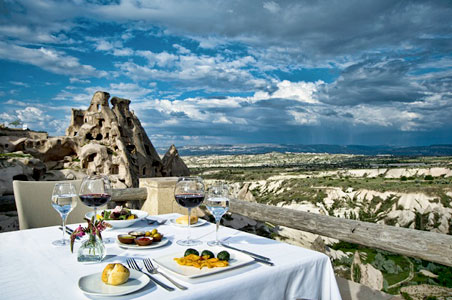 Argos’s Seki Restaurant delivers respectable Turkish and international dishes sourced from regional ingredients (and herbs and vegetables from the hotel’s own kitchen garden), but really wows with its magical views over the valley, especially from the outdoor terraces. Pair the fare and vistas with a local vintage: More than 10,000 bottles of international and local varietals line the wine cellar caves downstairs (guests can go down to pick out one that speaks to them), including vintages from Argos’s own vineyards.

What to Do in Cappadocia

The hotel is a good base for exploring the region, where extraordinary volcanic-rock landscapes of "fairy chimneys" (conical rock formations) are the scratch-the-surface lure, primed for hiking, horseback riding, mountain biking, and more. Dig deeper into the region’s rich ancient history, which comes alive at the innumerous stone-carved churches and castles (like at the UNESCO-protected, Byzantine fresco-filled churches of the Goreme Open-Air Museum, or the fairytale Uchisar Castle, set just up the hill from Argos), or the labyrinthine underground cave cities (including Kaymakli, Derinkuyu).

The region is also credited as being a cradle for the world’s wine-making tradition, with Cappadocia’s rich volcanic soils still producing diverse varietals; schedule a vineyard visit or sunset wine tasting overlooking the valley. The area is known for its first-rate hot air ballooning, too—getting a bird’s-eye perspective during a sunrise flight is not to be missed (we recommend Kapadokya Balloons).

Distances between sights and activities in Cappadocia can be vast, but if you’re not up for renting a car, you can turn to the Travel Atelier to craft customized full-day tours and itineraries, led by topnotch guides.

Low-season winter rates at Argos start from $195/night for standard rooms and from $380/night for suites.