News Larry Bleiberg You Can Finally Look Inside This Stunning D.C. Landmark. But Only for Another 25 Days
Home  >  News   >   Channel Islands, Santa Barbara 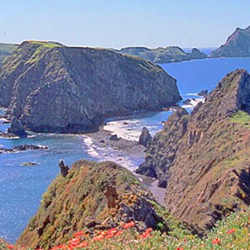 Where: Channel Islands National Park lies a few miles off the California coast between Los Angeles and Santa Barbara.

Why: Although the islands are within a day’s drive of 12 million people, they receive far fewer visitors than the faraway Galapagos Islands. Yet, like the Galapagos, the Channel Islands are a nature-lover’s paradise. There are thousands of plant and animal species here that are not found anywhere else on earth. The islands are also a great escape from the world, a place where you can truly feel at one with nature.

When to Go: Yellow-flowering giant coreopsis blanket the islands in spring, but early fall is best, when blue and humpback whales linger and elephant seals gather at their rookeries. Autumn’s smooth seas and clear waters also attract ocean kayakers and scuba divers.

Top Outing: Daily guided walking tours of Anacapa Island. This narrow, windswept rock’s annual rainfall is less than 10 inches and it has no trees, yet Anacapa shelters the world’s largest gull-breeding colony, the rare Anacapa deer mouse, and eight species of songbirds. There’s also a white lighthouse on the island — it punctuates the island’s squared-off profile like a hair-gelled cowlick.

Also Worth Seeing: San Miguel is the westernmost and flattest island. It has a ghostly caliche forest (standing sand casts of long-gone plant roots and trunks) and, in winter, is home to an estimated 50,000 elephant seals.

Where to Stay: Four Points Sheraton in Ventura sits on 17 acres of prime coastal land. Every room has a balcony with a view. For a more in-depth visit, bunk down on one of Island Packers’ multi-day cruises instead.

How to Get There: Most Channel Islands trips originate from Ventura Harbor, just off US 101.

Photos and text by Betsy Malloy