How to Celebrate the Holidays in NYC

New York City may be crowded, cold, and expensive during the holiday season, but these three strikes against it can’t stand up to the city’s many merits. Visitors that go with the flow, pack on the layers, and spot a bargain are assured a delightful time. May these tips and recommendations help you as you plan your upcoming trip to the Big Apple. Have a question? Ask our Forums for advice.

Top Things to Do 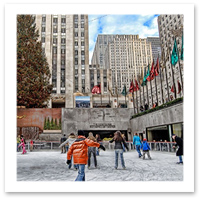 1. Get in the spirit at the Radio City Christmas Spectacular

“I think the Radio City Xmas spectacular is a great idea but I wouldn’t book it for the day/night you arrive. What if the plane is delayed or you’re too tired?” — mclaurie (see more)

“Yes, the streets are crowded, but the areas in front of many of the store windows are roped off so that those who want to see the windows can stop while the walkers can get by. The streets are not ‘literally’ impassable. That would mean that people are at a dead stop and of course they’re not. It’s crowded, sure, but you’ll manage and it’s so engergizing and exciting at Christmastime!” — goddesstogo (see more)

“The Intrepid is back and has new and more interactive exhibits/activities. They might like Stomp or Blue Man Group. How about a Knicks or Rangers game?” — nytraveler (see more)

“I still feel Central Park and Wollman Rink is the way to go! The view of the skyline at night is magical.” — bmw732002 (see more)

“The Skyscraper Museum was a great visit. Small, but of interest…you could spend a day downtown, taking the Staten Island ferry, going to the Skyscraper Museum, maybe even having a late afternoon drink at the bar in the Ritz Carlton in Battery Park City, Rise, which has the most spectacular view of the NY Harbor.” — mp (see more)

6. See the Van Gogh and Joan Miró exhibits at MOMA

“I’ve been thinking about the best time to visit MOMA, and I actually think the best time might be on a Friday afternoon right after lunch. MOMA offers free admission on Friday evenings starting at 4pm, so my theory is that attendance will taper off significantly for those people not interested in shelling out $20 starting Friday afternoon. The trick is to arrive by 1pm and get in and out of the museum by 4. So I figure Friday at 1pm might be the best of all possible arrival times. I’d love for someone to test this theory to see if it holds true.” — Doug_Stallings (see more)

“Starting from mid-November through Christmas you will find Christmas music on offer in many places;try the Cathedral of St John the Divine (worth a visit in itself, see http://www.stjohndivine.org/, and if you can get tickets for the Paul Winter concert, wonderful).” — Cicerone (see more)

“Just a thought—and you’ve probably already done this—but have you tried for 3 single tickets instead of 3 together? Even “sold out” shows often have scattered single seats available.” — janisj (see more of this topic)

Tips for a Happy Trip 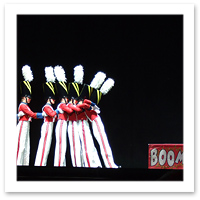 “There is simply nothing better than walking around Manhattan during the Xmas holiday season — be sure to catch the Xmas tree and skaters at Rock Ctr (50th and 5th), Top of the Rock for the view, the windows at Saks (across the street from Rock Ctr), Lord & Taylor (38th and 5th) and Macy’s, Bryant Park’s Xmas market and skating rink. Walk over to Hell’s Kitchen, and up the west side, spend some time in Central Park, window shop at Tiffany’s, walk through Grand Central Station, visit a museum or two, walk across the Brooklyn Bridge (have I filled up 3 days for you yet :-)? )” — sf7307 (see more of this topic)

“It’ll be cooooooollld. There’ll be snooooow. It will freeeeeze. Then it will thaaaaw. There will be puddles/lakes at every crosswalk. Then it will become ice. The wind will blow in your face. Tears will come to your eyes. You’ll have 2nd thoughts. But that’s NYC. You will have a great time. And stories to tell when you get back to the southland.” — sobster (see more of this topic)

“You may think of Fodor’s as dependably bland, but its “New York City 2009″ (Fodor’s Travel, 552 pages, $18.95) is the can’t-go-wrong choice for just about any first-timer to the Big Apple. First, it’s beautiful—great layout, nice maps, easy-to-read font on thick paper. And design matters with guidebooks: they have to be legible in low light, on crowded buses and in airports when you’re jetlagged and your contacts are killing you.” — Seth Kugel, New York Times

“I can relay on how NOT to get from LGA into the city…a shuttle bus. We took one last week instead of a car service and almost spent longer on the shuttle than we did on the plane from Birmingham. On our return, we used the Dial 7 car service. We were at the airport in less than 30 minutes.” — nolefan (see more of this topic)

Where to Stay (Cheaply)

With a group…
Buddakan recommended by mclaurie (see more recommendations)

A Slice of Brooklyn

“If you like pizza, there’s a fun pizza tour in Brooklyn that not only gets you a taste of some great pizza, but also shows you highlights of that borough of NYC. If you’re coming at Thanksgiving, the same co. also does a bus tour of an area known for a crazy number of Xmas lights and they’re starting a neighborhood tour too.”
— mclaurie (view more)

“At Lincoln Center the BEST one was the Metropolitan Opera Tour. It was really backstage, in the dressing rooms, the scene shop, the costume shop, the light booth, right out on stage — and surprisingly we did this WHILE they were working on loading in a show. Very interesting.” — NeoPatrick

“I did a walking/food tour of Bleeker Street last year and it was great. I’m a bit of a foodie and not only seeing but tasting for me was terrific. I didn’t book it but I am pretty sure it was this one.” — baysidegirl (view more)

See our favorite walking tours (if you can bear the cold)