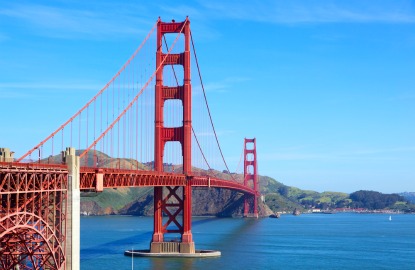 Nearly 25 years ago, on the 50th anniversary of the Golden Gate Bridge, a commemorative celebration closed the iconic landmark to vehicular traffic and opened it to pedestrians. But the event’s popularity had unforeseen consequences: Crowds soared to an estimated 250,000—double the anticipated size—and actually flattened a section of the bridge, injuring some in the chaos.

This year, as the world’s most famous bridge approaches its 75th anniversary, bridge authorities have expanded the celebration to a broader, yearlong community focus, with the motto "Bridging Us All." On May 26 and 27, the Golden Gate Festival will feature a ton of bridge-themed events and activities from Fort Point, under the bridge’s southeast pavilion, all the way down Fisherman’s Wharf to Pier 39, with the landmark and its famous International Orange color beaming in the background.

But visitors who want to avoid the crowds of the anniversary weekend will have plenty of other opportunities to experience the milestone. Commemorative events (and bridge improvements) will continue throughout the year, including historical exhibitions, movie nights, and a major overhaul to the bridge’s southeast toll plaza that will unveil a new visitor center, trail renovations, and improved signage.

Most festival events are free and open to the public. Among the offerings: performances by the Oakland Symphony Chorus, a parade featuring historic watercraft, a display of classic cars from 1937 to the present, special tours of the San Francisco Maritime National Historical Park, and a visual exhibit of 1,500 shoes representing lives lost at the Golden Gate Bridge. (A sad fact that’s sometimes overshadowed by all the celebration hype: It’s the most popular place in the world to commit suicide.)

The festival will conclude on May 27, the actual 75th anniversary date of the bridge’s opening, with a spectacular fireworks display.

To fully grasp the history, inspiration, and effort behind the bridge, stop at the San Francisco headquarters of the California Historical Society—a building that’s impossible to miss in the SOMA neighborhood, as it was painted International Orange earlier this year. Through October 14, CHS will house "A Wild Flight of the Imagination: The Story of the Golden Gate Bridge." It takes a look back at the natural history of the Golden Gate, which refers to the geographical region where the San Francisco Bay meets the Pacific Ocean, and chronicles the events leading up to the bridge’s conception to its completion in 1937.

Among the treasures of the exhibit, many of which have never been seen by the general public: the original Western Union telegram to San Francisco Mayor "Sunny Jim" Rolph, dated December 29, 1924, with news that the War Department finally approved the bridge; works from renowned artists including Ansel Adams and Maynard Dixon; and original tools, tool belts, and an actual rivet that visitors can hold.

Another exhibit, at the Marin History Museum in San Rafael, shows the impact the bridge made on the communities across the bay in Marin County. Among the standout pieces are a steel tube used to send messages down cables, assorted carpenter’s tools, and historic photos showing the bridge at various stages of completion. "The Golden Gate Bridge: An Icon That Changed Marin" runs through September 1.

Another noteworthy addition to the bridge area, look for the green-screen photo booth, located in the Round House. For $20, visitors can pose against one of three backdrops—climbing the cables, atop the South Tower, or backed by a crystal-clear shot of the bridge—an ideal solution for San Francisco’s famously foggy weather.

Guided tours of the bridgeare now on offer, and include a first-ever night tour with exclusive access to the bridge sidewalk during non-public hours. Offered seven days a week through the summer, tours will use headphones for visitors and a microphone for guides so they can speak in a normal, conversational tone while still being heard over the wind and traffic. Advance tickets will be available in mid-April, and walk-up tickets are subject to availability.

There’s no more fitting spot to call home during a bridge-centric trip to San Francisco than the brand-new Inn at the Presidio. This charming, 22-room property on the Presidio—the 1,500-acre former military base and National Historic Landmark—officially opened on April 1 and is the only new hotel to open in San Francisco in 2012 (rates from $195 to $350, with weekend availability extremely limited throughout 2012). It’s also the first hotel on the Presidio, which will host bridge-themed exhibitions and movie nights.

Located in an exquisitely renovated, three-story building, which once served as officers’ quarters, the inn features well-appointed rooms, views of the bridge and bay, and proximity to the waterfront and the upscale Marina neighborhood. Nightly rates include a continental breakfast, internet access, and an evening spread of cheese and California wine. Grab a glass and a chair by the outside fire pit for a fitting toast to the City by the Bay, and, of course, its spectacular bridge.