News Ronny Maye Should You Cancel Your Vacation to an Area Impacted by a Natural Disaster?
NewsCelebrating Julia Child: Judith Jones’s Favorite Memories 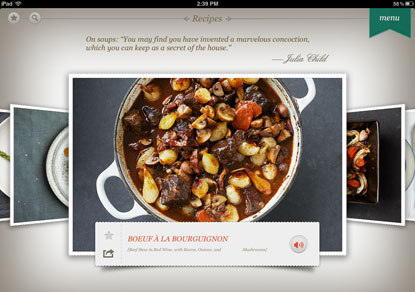 Julia Child would have turned 100 years old this week (Wednesday, August 15 to be exact). So to celebrate, Knopf (the publisher of Mastering the Art of French Cooking) recently released an iPad app with recipes, color photos of finished dishes, 30 clips from "The Way to Cook," French pronunciation help, grocery lists, rare photos of Julia herself, kitchen resource information, and essential kitchen tips.

We caught up with Judith Jones, Julia’s incredibly forward thinking publisher (she plucked The Diary of Anne Frank from a reject pile and took on Julia’s enormous manuscript when no other publisher would), who is living and cooking in Vermont, to talk about Julia, the memories of working with her, and what she thinks of this new app.

Fodor’s: What was it like to work with Julia?

Jones: She used me even before we had met, while her husband was posted in Oslo. We would write back and forth, and she would have me check out ingredients and things like that. [For example,] she told me you couldn’t get a decent baguette in New York, which you couldn’t. She and her husband Paul tried making them, but it was hopeless. So she packed up American flour, American salt, and American yeast of course, and I think the water she just let go. She got in touch with a great teacher from a boulangerie in Paris and got instructions. Then she wrote me a postcard and said it’s all in the folding of the dough. Well of course it wasn’t all in the folding of the dough; it’s about 10 other things. But she always got me very involved.

She’s notorious for being relentlessly determined. It sounds like that reputation is spot on.

Yes, we had a cassoulet in the first book. It is somewhat different according to different regions. She and Paul almost got a divorce over it! The whole wall of her kitchen would be covered with notes from old cookbooks. There must have been at least 40. Then at the end, her recipe. Oh, and she would get formulas from them. She would say too much this, too much that, not so good. Then finally she would find the formula that she used.

Are there any places that still remind you of Julia?

Yes, there are places in New York—some of the really old French restaurants—that remind me of her. We’d go and have lunch together. I remember one lunch in particular, we had fresh scallops which were delicious. But she said, "They didn’t use clarified butter." She had that very analytical mind toward French food, and wanted the best of it and she didn’t want people to cut corners because of this stupid fear of fat. I loved it when she said you can have your vitamins in a pill if that’s what you’re looking for. Food is supposed to be a pleasure. What she noticed was that butter burns and you use quite a high heat when you are sautéing scallops. There were signs of burnt butter. She was quite right.

That’s a great note about vitamins. Was that an important motto she lived by—food as pleasure?

Yes, well, she came up to Vermont towards the end of her life for a ‘conversation’ with Julia at an old library. Well, the seats were gone in 24 hours, so we moved to a church. Then those seats were gone in another two days. So finally we moved to the high school auditorium. Somebody said, "How would you really define French cooking?" Well, I remember her sort of swinging her leg as she talked. She said, "I would call it soigné. Now take green beans. You buy the freshest green beans, you remove the tops and the tails, and you plunge them into a big pot of boiling salted water." She said, "don’t listen to people when they say you are washing out the vitamins. Take that in a pill. Then you drain them and throw them into cold water and ice, to set the color." As she described it, she was in love with those beans and then the sweet butter that she said you’d fold into the beans. Then she said, "that’s soigné. It means you care." She always talked to people that way; people went away thinking she’s right.

What’s funny is that Americans, I like to say, have almost a love/ hate relationship with food. We want to go Julia’s way and then the next—oh no, they are telling us we mustn’t have salt. It’s always something. I think that people are beginning to catch on and are rebelling in their own quiet way.

Will you be celebrating Julia’s 100th birthday?

Last year, well it wasn’t her 100th, but my step-daughter and I had a Bastille Day dinner and that was a lot of fun. This year, there are lots of things going on from up here in Vermont to Washington. And we are working on the app, as well. To be honest, I didn’t even know the word a few months ago, but I signed on to see that it genuinely represented Julia and her way of thinking and writing. I think Julia was always open to new ideas and equipment, so I think she would have liked this app and been open to it.

The app, Mastering the Art of French Cooking: Selected Recipes, is available on iPad and Nook for $2.99.