News Amy Fallon With Violence Continuing There, Should We #VisitUganda?
Home  >  News   >   Catch a James Taylor Concert on the Queen Mary 2

Catch a James Taylor Concert on the Queen Mary 2 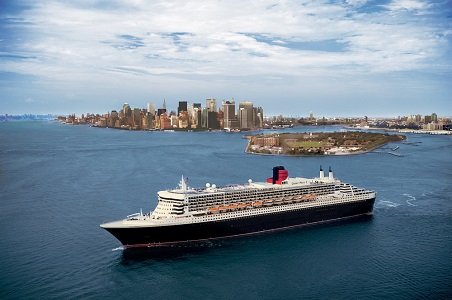 Seasoned James Taylor fans are wont to sing along when their iPod shuffle lands on "Sailing to Philadelphia," his duet with British rocker Mark Knopfler. But, this August, aficionados of the five-time Grammy winning singer-songwriter can actually sail with Sweet Baby James aboard Cunard‘s flagship ocean liner, Queen Mary 2, when it embarks from New York City to Southampton, England, by way of Halifax, Nova Scotia.

On the ship’s August 27, 2014, 8-night eastbound transatlantic crossing, Taylor and his band will take to the 1,094-seat Royal Court Theatre for two intimate concerts during the cruise. Taylor is no stranger to QM2 and has sailed aboard the ship previously. "In 2009 we realized a collective dream using that passage to transport and rehearse for our European summer tour: band, crew, and family—kit and caboodle," says Taylor. "Now, in 2014, I am looking forward to celebrating the ship’s 10th anniversary alongside her crew, staff, and guests by performing two onboard concerts as my band and I make our next European passage. Hallelujah, no jet lag!" (Check out this YouTube video that shows James Taylor aboard Queen Mary 2 back in 2009.)

Other famed musicians—from jazz great Dave Brubeck to classic rock legend Rod Stewart to the more contemporary Lenny Kravitz—have all also performed for Cunard passengers in the past.

Taylor’s performances during the August 27 crossing are part of the yearlong celebration of Queen Mary 2‘s 10th anniversary. This voyage is the perfect opportunity to sample Cunard’s white-glove service and also enjoy the music of one of America’s most enduring musical artists. In addition to winning multiple Grammy awards, Taylor is a Rock and Roll Hall of Famer, was recently awarded France’s Chevalier of the Order of Arts and Letters, and is a recipient of the National Medal of Arts, which was presented to him by President Obama during a White House ceremony. For fans, though, James Taylor is best known for writing and singing songs like "Something in the Way She Moves," "You’ve Got a Friend," "Shower the People," and "Don’t Let Me Be Lonely Tonight."

In addition to the concerts, travelers will be treated to a series of Royal Nights themed balls in the Queens Room and can also enjoy West End-style musical revenues staged in the Royal Court Theatre.

Per passenger fares start at $1,698. Clients of Virtuoso, a luxury travel agency network, get the first crack at this special event. Virtuoso agents can reserve spots for their clients now, before the full on-sale date and marketing push begins on December 18, 2013. Contact your Virtuoso travel advisor to book, or call 855/570-3830.