News Larry Bleiberg You Can Finally Look Inside This Stunning D.C. Landmark. But Only for Another 25 Days
Home  >  News   >   Castles of Wales 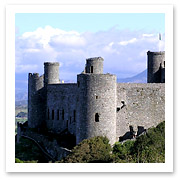 Many people make the mistake of thinking that they can see Wales in a day or so, but that’s only enough time to scratch its surface. In this land of castles, more than 400 fortresses provide an inexhaustible supply of inspiration for any lover of history. Here are just a few of Wales’s most notable fortresses.

A wealth of legend, poetry, and song is conjured up by this 13th-century castle, built by Edward I to help subdue the Welsh. The castle, on a rocky promontory, dominates the little coastal town of Harlech, 12 miles south of Porthmadog. Its mighty ruins, visible for miles and commanding wide views, are as dramatic as its history (though you have to imagine the sea, which has since receded, edging the castle site). Harlech was occupied by Owain Glyndwr from 1404 to 1408, during the Welsh revolt he led against the English. Below the Castle are the links of Royal St. David’s, one of Wales’s best gold courses. www.cadw.wales.gov.uk. 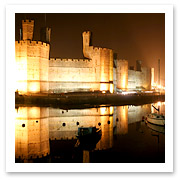 Standing like a warning finger, the grim, majestic mass of Caernarfon Castle looms over the waters of the River Seiont. Numerous bloody encounters were witnessed by these sullen walls, erected by Edward I in 1283 as a symbol of his determination to subdue the Welsh. The castle’s towers, unlike those of Edward I’s other castles, are polygonal and patterned with bands of different-colored stone. In July 1969, Elizabeth II presented Prince Charles to the people of Wales from this castle. www.cadw.wales.gov.uk.

Continuously occupied since the 13th century, this castle is one of the most opulent residential castles in Britain, with gardens that are equally renowned. Its battlements rear high on a hilltop, and Italian- and French-influenced terraced gardens surround the castle. Below gigantic yew hedges, the grounds fall steeply down to wide lawns and neat Elizabethan gardens.

Tucked away in the Welsh Capital in Bute Park, one section of the city’s hundreds of acres of parkland, is this unusual historic site, with Roman, Norman, and Victorian-associations. 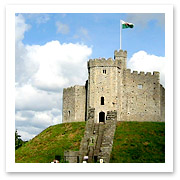 Parts of the walls are Roman, the solid keep is Norman, and the whole complex was restored and transformed into a Victorian ego flight by the third marquess of Bute. He employed William Burges (1827-81), an architect obsessed by the Gothic period, and Burges transformed the castle into an extravaganza of medieval color and careful craftsmanship. It is the perfect expression of the anything-goes Victorian spirit. www.cardiffcastle.com.

Of all Edward I’s fortresses, this castle, a mighty, many-turreted stronghold built between 1283-1287, preserves most convincingly the spirit of medieval times. Along with Conwy’s town walls, the castle is a UNESCO World Heritage Site. The eight large round towers and tall curtain wall provide sweeping views of the area and the town walls. 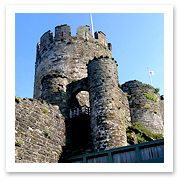 Although the castle is roofless (and floorless in places), you can read the signs, take a tour, or buy a guidebook to visualize the Great Hall and other chambers. Conwy Castle can be approached on foot by a dramatic suspension bridge completed in 1825.www.cadw.wales.gov.uk.