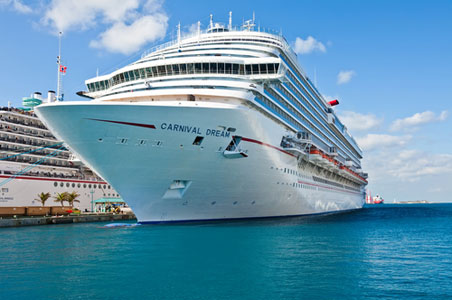 In the wake of Tuesday’s announcement of a fleet-wide comprehensive check on all vessels, Carnival is dealing with another ship snafu—but this time, cruise-goers will be flown home from the ship while it remains stuck at port.

Over 4,000 guests set sail on the Carnival Dream from Port Canaveral, Florida on Saturday, on course to St. Maarten in the eastern Caribbean. Though the ship was scheduled to leave St. Maarten on Wednesday night, a power outage kept passengers on board even once power was restored. Though the technical glitch did not cause problems near the scale of last month’s Carnival Triumph episode in the Gulf of Mexico, plumbing and elevator service were touch and go for several hours, with guests unable to depart the ship docked in Philipsburg.

The issue, explained in Carnival’s statement as a malfunction "during regularly scheduled testing of the ship’s emergency diesel generator," took over seven hours to resolve, CNN reports. Luckily, passengers learned on Thursday afternoon that they would be able to depart and explore the island while the problem is addressed.

Carnival is pledging to both make arrangements for all guests to fly home via private charter flights, and to refund three days of the voyage. Guests who remain unfazed by the incident will also be able to book their next Carnival cruise for 50 percent off.