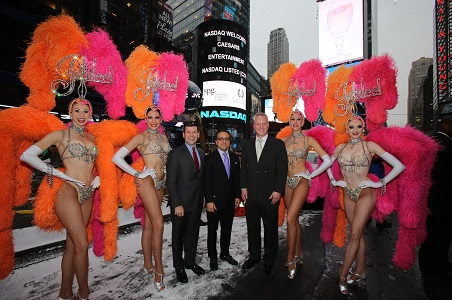 Following on the heels of a similarly launched hotel partnership in June (when Hyatt- and MGM-branded hotels announced their own Vegas collaboration), the Caesars Entertainment and Starwood hotel groups have now likewise teamed up to offer reciprocal benefits across their loyalty programs. Starting January 9, 2014, guests enrolled in corresponding loyalty programs will be able to earn and redeem points and share elite status benefits by staying with either hotel brand.

Another eight Caesars’ properties in Atlantic City, NJ, and Lake Tahoe, NV, are also participating in the joint venture.

By allowing reciprocity between their members, the Starwood Preferred Guest (SPG) and Caesars Total Rewards (CTR) programs are rapidly expanding their presence in key markets. This change is especially notable in Las Vegas, where casino hotels have typically not been affiliated with major global loyalty programs. Starwood suddenly has thousands of Vegas hotel rooms available to its members for earning points and for cashing in on free night awards. Members of the CTR program, in turn, gain access to the entire portfolio of Starwood properties around the globe.

While details on the redemption side of the partnership are still pending, on the earning side, SPG members will rack up 2 points for every eligible $1 charged to their hotel folio at Caesars Entertainment hotels; members will also earn points in the Caesars program for the same stay.