Air travel isn’t what it used to be. With overcrowded planes and endless delays, flying is a headache we’d rather avoid. Another reason to dread air travel: the chances of getting bumped off your plane are the highest they’ve ever been. 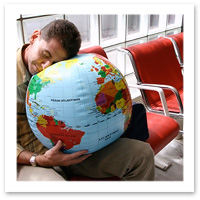 Talk Travel in the Forums: How do you avoid being bumped?

Nearly 53,000 passengers were denied boarding on U.S. airlines from January to September 2007, according to the Office of Airline Information at the Department of Transportation, and numbers for the entire year are expected to exceed those of the past two years: 45,000 passengers were bumped from flights in 2005, and in 2006 the number jumped to almost 56,000.

The airline with the worst record for bumping is Atlantic Southeast, the SkyWest subsidiary based in Atlanta. Almost five out of every 10,000 passengers were denied boarding here. The next two worst offenders are Comair, a Delta Air Lines subsidiary, and Delta Airlines. You have the least chance of getting bumped if you fly JetBlue Airways — .02 of every 10,000 passengers were denied boarding in the first three quarters of 2007.

The Montreal-based International Civil Aviation Organization estimates that 1.67 billion people took to the skies in 2000. By 2006 that number ballooned to 2.1 billion people. With more air travelers than ever before, and with airlines increasingly overbooking flights to compensate for “no shows,” it’s no surprise that there’s an increased likelihood of passengers being denied boarding.

Fortunately, there are steps you can take to make sure you’re not booted off the plane. Mike Boyd, president of Boyd Group, an aviation consulting firm based in Evergreen, Colorado, says that having a confirmed seat when you buy your ticket is essential. Since airlines are overbooking flights, not having a seat assignment will increase your chances of getting bumped.

Boyd also recommends checking in online 24 hours prior to departure. “You should always log on at home the day before departure and print out your boarding pass. If you’re already checked in, it’s unlikely you’ll be denied boarding.”

Additionally, it’s wise to avoid flying during peak travel periods like Thanksgiving and Christmas, and it’s best to travel early in the day because planes are less crowded. “Flying in the late afternoon or evening sometimes means that airlines are dealing with a backlog of delays and rebooked passengers who didn’t make earlier flights,” says Boyd.

Know your legal rights
Of course no matter how hard you try to avoid it, you might still get bumped. If so, you do have legal rights says E. Christopher Murray, an aviation lawyer with Garden City, N.Y.-based law firm Reisman, Peirez, and Reisman.

First, says Murray, ask your airline for the passenger bill of rights, which details what you’re entitled to. These rules are established by the Department of Transportation and protect passengers from bumped seats and cancellations.

Additionally, if you’re bumped and get to your destination up to two hours later than originally scheduled, you’re entitled to the amount equal to the price of your one-way fare, with a maximum of $200. Get there more than two hours later, and you’ll get an amount equal to 200% of your fare, with a maximum of $400. If the airline doesn’t get you to your destination within 24 hours, then you’re entitled to a full refund of the ticket price plus $400. You should immediately file a complaint with the DOT if your airline isn’t following these rules.

Murray says that because of the negative rap they’ve received recently, airlines are trying to do everything they can to cultivate customer loyalty, so in addition to these benefits they will offer extra perks like free tickets and meal vouchers. Since these rules aren’t set in stone and vary based on the airline, it’s difficult to suss out which airline is the most generous. That said, JetBlue and Southwest are reportedly giving fliers the best compensation.

“The small airlines are usually the most generous with their customers in giving more than what’s required by law,” says Murray. “In general, though, all airlines are getting increasingly generous in a bid to get customers.”

Voluntary bumping
If you have a few hours to kill, or a really flexible schedule, you can choose to get voluntarily bumped. Why? Because the perks can be quite sweet, and with airlines in an all-out war for customers, the perks are getting sweeter.

In the recent past, rewards for giving up seats could be anything from an upgrade to first-class on the next flight to a coupon for a free meal at the airport. For international routes and longer domestic flights, such as New York to Los Angeles, passengers often received a voucher to use toward a future flight, the amounts totaling anywhere from $250 to $500.

Today, says Murray, the airlines are so hungry for customer loyalty they’re handing out cold hard cash when people voluntarily give up their seats. “The airlines are giving out anywhere between $500 and $1000 in cash, or writing a check on the spot,” says Murray.

How long can travelers expect such luxe rewards for voluntary bumping? Murray says the benefits are an outgrowth of the dismal state of the airlines, so as long as airlines feel like they’re getting a negative rap, they’ll continue to buy customer loyalty by rewarding well for bumping.

There is, of course, a catch. Travelers can only expect to make big bucks on international and longer domestic flights. Giving up your seat from New York City to Boston, for example, isn’t necessarily going to translate into $500, since there are dozens of daily flights between the two cities, says Murray.

Parting with your seat on an overbooked plane from LA to London, however, can mean big bank. “It’s not fun to miss a long-haul flight, but the bigger your problem, the bigger your pay day.”