Manhattan has world-famous museums and international art galleries, but Brooklyn has an exciting arts scene all its own, fueled by the many creative people who live there. If you want to see eye-popping street art, check out cutting-edge galleries, and spend a few hours at top-notch museums, read our handy guide to the borough's best art spaces. 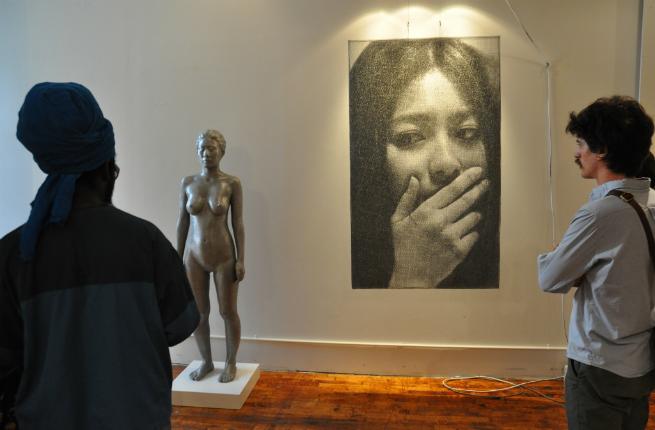 Today the largest and most active arts community can be found in Bushwick, primarily in the blocks between the L train’s Morgan Avenue and Jefferson Street stops. As soon as you emerge from the subway, you’ll see vivid street art and the BogArt, a former industrial warehouse converted to galleries and studios. Over in DUMBO, a number of the galleries from 111 Front Street Galleries are relocating to the old Galapagos Arts space, now called the Stable Building. The Pioneer Works, in Red Hook, is a restored machine factory that now houses exhibition spaces as well as studios for artists in residence. 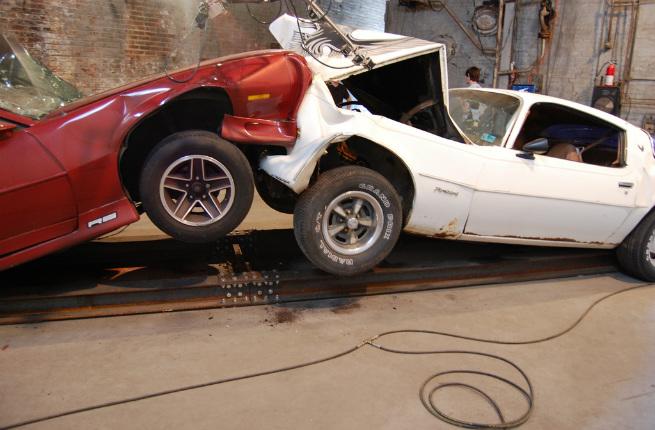 Gallery hopping in Brooklyn can be a fun way to spend an afternoon, but it takes a bit of planning and really depends on what's showing (some are generally great, some just have the occasional great show). Most galleries in Williamsburg, Greenpoint, DUMBO, and Bushwick are open to the public on weekends; some are open by appointment on weekdays.

In Williamsburg, Pierogi and its affiliated space, the Boiler, have long anchored the art scene here, while Sideshow and Front Room host fun rotating exhibits and openings. In Bushwick, Luhring Augustine is consistently worth visiting. To find out what's on in the moment, grab a free copy of Wagmag, Brooklyn’s art guide, at select galleries, or check http://www.bushwickgalleries.com/spaces for up-to-date information. 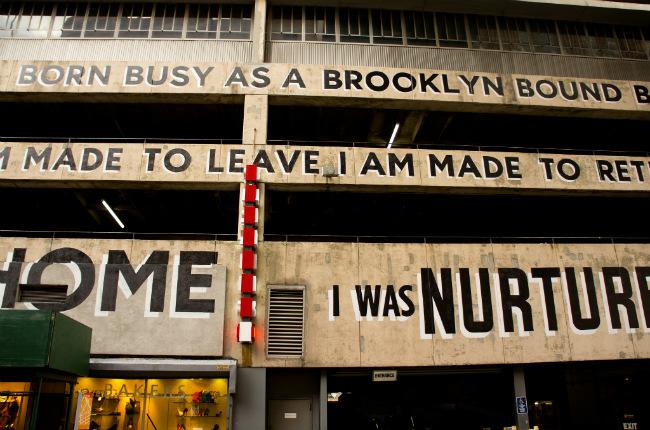 There's street art all over Brooklyn, from slapdash illegal tagging to masterful aerosol paintings. Standouts include the Swoon mural in Red Hook at Conover and Pioneer Street, Brazilian street artist Eduardo Kobra’s technicolor portrait of Andy Warhol and Jean-Michel Basquiat on the corner of North 9th Street and Bedford Avenue, Iranian brothers Icy & Sot’s massive stencil in the shadow of the Williamsburg Bridge, Barry McGee’s collage on the side of the Mark Morris Dance Company near BAM, and Stephen “ESPO” Powers’ “Love Letter to Brooklyn” on the side of the Macy's building in Downtown Brooklyn. 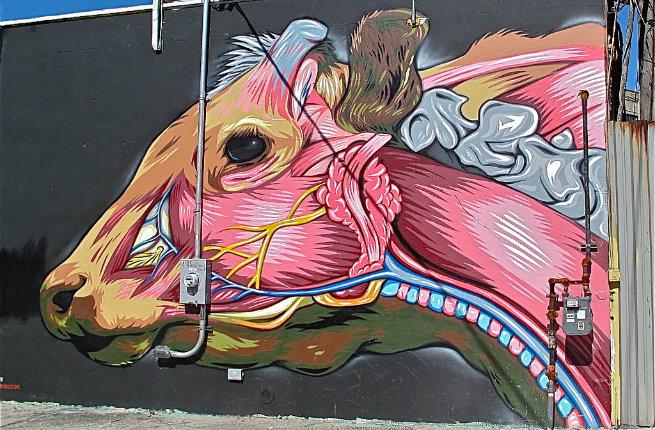 Check out street-art hubs like Bushwick's Troutman Street, where you can see the largest collection in the borough, organized by the Bushwick Collective. The murals stretch on for several blocks, and you’ll find cafes, restaurants, and bars interspersed throughout. Not far away, on Moore Street and around Roberta's and the BogArt, buildings constantly exhibit new pieces (some commercially sponsored). In Greenpoint, the warehouses around the India Street Pier feature some impressive large-scale works. Over in DUMBO, under and around the Manhattan Bridge and the BQE, are the DUMBO Walls: eight walls decorated by the likes of Shepard Fairey and MOMO (and sponsored by, among others, NYCDOT). 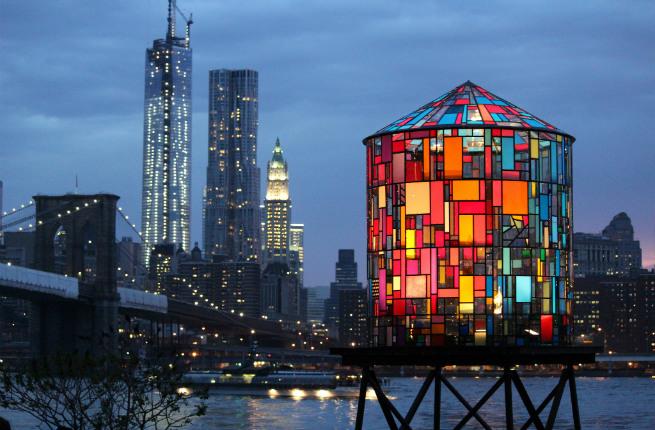 This is Brooklyn, so you never know what might pop up. Keep your eye out (and on social media) to find out about interesting exhibitions. Tom Fruin's gorgeous plexiglass and steel watertowers have been so popular that they might become permanent. 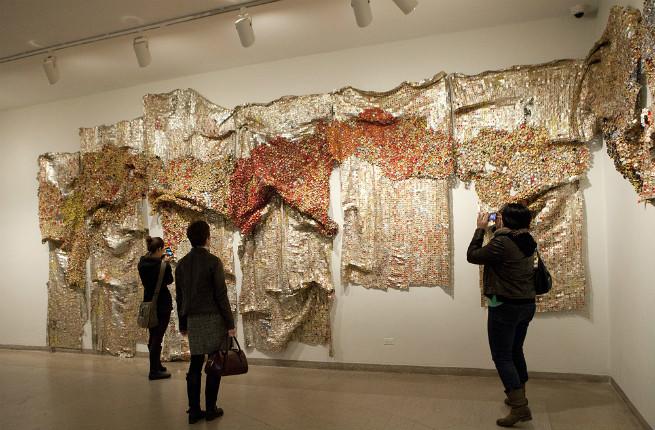 The Brooklyn Museum, on the edge of Prospect Park, stands as a testament to the borough’s long history of supporting the arts. Inside, you’ll find a rich permanent collection and rotating exhibits by heavy hitters like Ai Weiwei, as well as up-and-coming Brooklyn-based artists like Kehinde Wiley. Over in Fort Greene, BRIC, an arts organization serving Brooklyn since 1979, unveiled its huge new center in 2013 complete with performance spaces, film studios, and a 3,000-square-foot gallery. The Pratt Sculpture Park, in Clinton Hill, occupies the art institute’s entire Brooklyn campus and features around fifty works. In nearby Fort Greene, MoCADA focuses on art with a social or political message about the African diaspora. 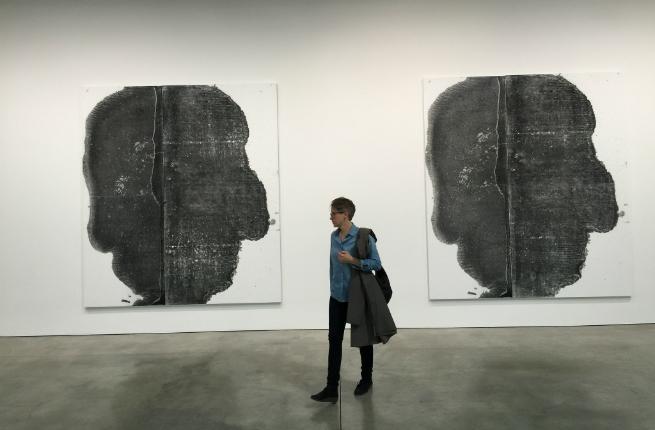 The best way to experience Brooklyn’s art scene is undoubtedly by attending the open studios, block parties, and festivals thrown in various neighborhoods. Greenpoint Gallery Night opens up artist studios twice a year, in March and September. The Bushwick Collective throws a massive block party in summer, with street artists at work, food stands, and live music on and around Troutman Street. Similarly, Bushwick Open Studios and Gowanus Open Studios grant insider access to the neighborhood’s normally private workshops. In Williamsburg, the second Friday of every month is gallery night, and in DUMBO it’s the first Thursday of most months.