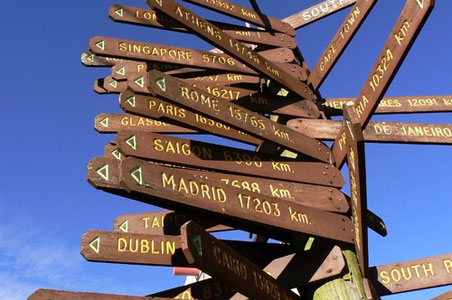 Well one industrious British man has proven that there is a way to circumnavigate the globe without having to step foot on a plane. Guinness World Records has confirmed that Graham Hughes, 33, has become the first person to visit all 201 countries in the world without flying, the Christian Science Monitor reports.

Hughes made a documentary about his travels, and also used the opportunity to raise money for the organization Water Aid, which provides clean water to communities in developing countries.

But beyond his artistic and charitable inclinations, Hughes kind of just wanted to prove that it could be done.

“I love travel, and I guess my reason for doing it was I wanted to see if this could be done, by one person traveling on a shoestring,” Mr. Hughes told the Christian Science Monitor earlier this week. “I think I also wanted to show that the world is not some big, scary place, but in fact is full of people who want to help you even if you are a stranger.”

While there were no planes on this trip, there certainly were trains, automobiles, buses, boats, and good old fashioned walking. He told the Monitor that the hardest countries to get to were not those in the Middle East, but rather island nations like the Maldives and the Seychelles where he had to contend with the threat of piracy. He endured a couple arrests as well as a brief hiatus from the trip when his sister passed away in 2010. But he said that her memory inspired him to keep going and accomplish his goal.

Hughes was in South Sudan earlier this week, and plans to continue his journey across Africa and into Europe. If all goes well, he’ll be back home in Liverpool for Christmas.