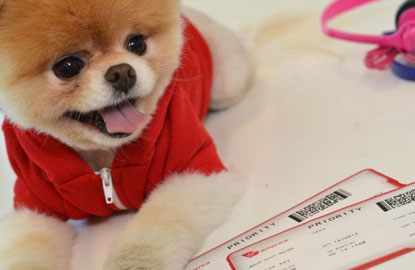 You can bet Toucan Sam and the Meow Mix cats have their agents on the phone today as a video of "World’s Cutest Dog" Boo races around the internet with the force of a thousand "Awws!"

Since July, Boo, already famous for his web presence as well as for just being ridiculously adorable, has been the Official Pet Liaison for Virgin America. The company had previously posted pictures of the pup on its Facebook page. Yesterday, a "behind-the-scenes" look at that photo shoot was released on YouTube (video below). In the video, Boo and his pal Buddy pose for photos, race around San Francisco International Airport, patrol a mood-lit Virgin America plane, and generally delight and amaze bystanders.

In an interview with the Huffington Post after the initial photos were posted, Virgin America spokesperson Abby Lunardini spoke about the airline’s commitment to passengers, regardless of species.

"As a pet-friendly airline we want our guests—those on two legs and those on four—to have as comfortable and enjoyable experience as possible on Virgin America."

Boo seems to be excited about his new career in air travel. When he was initially offered the position, he posted on his Facebook page:

"Virgin America asked me to be their pet liaison! Such an honor to bestow upon just a little pup with big hair. I think this is the closest that Buddy and I will ever get to having wings :)"

Part of Boo’s duties in the coming months will include giving advice on pet-friendly travel.