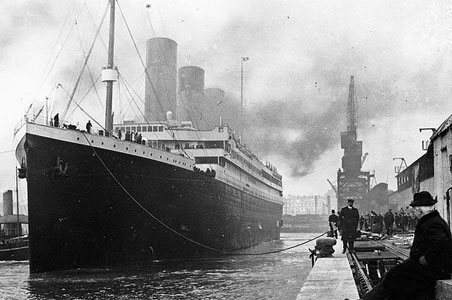 Last year we reported on Australian billionaire Clive Palmer’s plans to build a life-sized replica of the Titanic, named Titanic II, on his Blue Star Line. At the time we thought he might, you know, give up for pretty much any of the common sense reasons that come to mind. Alas, he is pressing on. Points for going big, Palmer.

At a recent press conference aboard the Intrepid Sea, Air and Space Museum, Palmer displayed the blueprints for what he calls "the ship where dreams come true," reports USA Today.

The ship will be built by a state-owned Chinese company and will embark on its maiden voyage in the third quarter of 2016. Palmer claims that some 40,000 people have already registered for tickets aboard the Titanic II, which at 883 feet will be three inches longer than the original. According to USA Today, the ship will house an old-timey gym, Turkish baths, a swimming pool, theater, and a squash court, among other amenities, but no TVs and most likely no Internet. The ship is going to be so popular, claims Palmer, he’ll have to build the Titanic III.

While we’re moments away from booking our own swanky first class cabin on the Titanic II, we also see that this ship, as a floating memorial to its predecessor, could easily go one of two ways. Hopefully it will go the way of a tasteful remembrance of the ill-fated ship that came before and not just a display of enormous wealth. But when Palmer dropped this on the Associated Press, we cringed more than a little: "One of the benefits of global warming has been there aren’t so many icebergs in the North Atlantic these days."

What do you think? Is the Titanic II an homage to an important part of history, or a flashy (and disrespectful) cash cow?