Bike Sharing Programs Around The World

Bikes are hot right now; vintage bikes with Parisian paniers (for baguettes and brie of course), fixed-gear bikes with leather wine bottle straps, and city-wide bike-sharing programs with 24-hour access. It’s true, North America’s been a little slow to shift gears from four wheels to two, but the trend toward more densified, liveable cities has spurred a peddle-pumping revolution in major centers like Washington DC, Boston, Miami, Montreal, and Toronto.

Internationally, this healthy and environmentally friendly form of public transport has been a la mode for awhile—just look at the number of Copenhagen trendsetters on bikes plastered all over Pinterest. In fact, it’s estimated there are now more than 300 organized bike rental programs worldwide with a fleet of over 250,000 bikes.

An everyday solution for locals and sightseers alike, city bike shares scatter stations near parks and major transit hubs where bikes can be checked in and out. For example, in Paris there are stations every three blocks, and it costs as little as 1.70 Euro per day, 8 Euro per week, and 29 Euro per year to cycle off the foie gras or macarons that persuade your palate.

Insider Tip: Cycling programs are designed for short commutes. Take out a bike for a 30-minute spin and you’re singing, take out the same bike all day (without checking it in at all) and you’ll be crying in a sea of dollar bills. 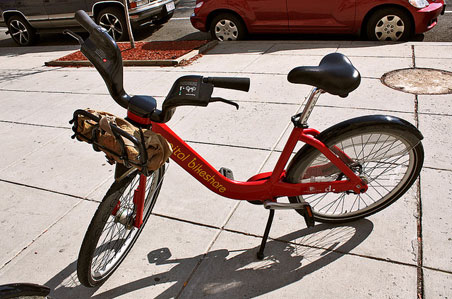 Washington’s Capital Bikeshare is currently the largest program in the US, with Minnesota close behind. When New York launches Citi Bike in the spring of 2013, the estimated  10,000 bikes will be more than Washington DC and Minnesota’s bike count put together. 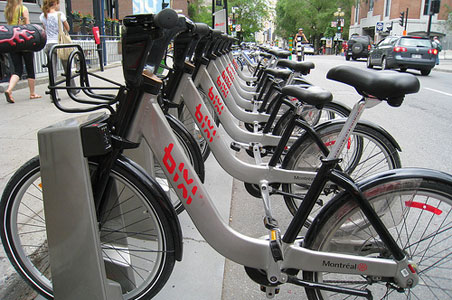 If a bicycle and a taxi had a baby, they’d naturally name it Bixi, which also happens to be the functional name used for the first and largest bike program in Canada. Since its successful launch in 2009, a brood of 5000+ bikes and 400+ stations have been keeping French Canadians fit during spring, summer and fall. 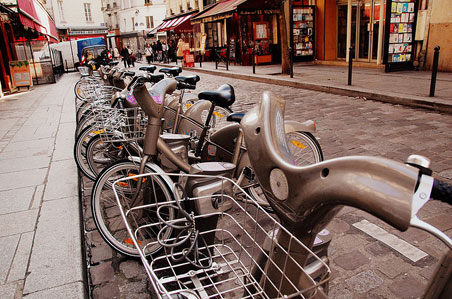 Always ahead of the curve, it was Paris’ Velib’ program that painted other cities green with two-wheeled envy. Sure, Copenhagen’s system arrived in the 90s, but Paris’ was the tipping point. Copied the world over, more than 20,000 bikes cruise the city’s historic streets. 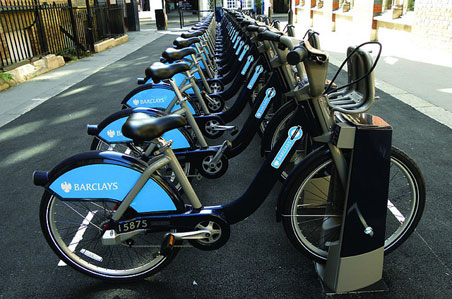 Not to be outdone by Paris, London started its own bike-share scheme in 2010 called Barclays Cycle Hire, named after the large London Bank who donated a hefty sum of the set-up cost in exchange for exclusive advertising rights. Rather than associate the bikes with a corporation, locals often refer to their rented wheels as "Boris Bikes" in celebration of Mayor Boris Johnson who was instrumental in leading the peloton from concept to execution. 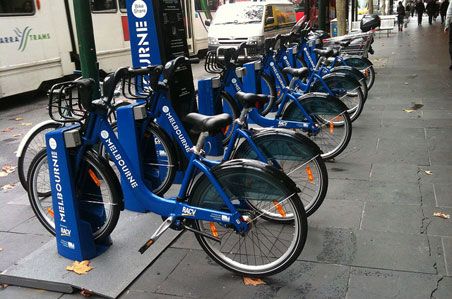 Melbourne was the first city in Australia to adopt a city-wide bike program based on Montreal’s Bixi system. The launch of Brisbane’s CityCycle closely followed three months later.

Not surprisingly, China has the largest bike share in the world in the city of Hangzhou. More than 60,000 white and red bikes pedal the pavement, and stations are a mere 100-meter dash apart.

Cycling on the mind?