News Apeksha Bhateja What Are the Chances You'll Get Monkeypox at a Hotel?
NewsBeyond the Table: In England, It’s Farm-to-Hotel

Beyond the Table: In England, It’s Farm-to-Hotel 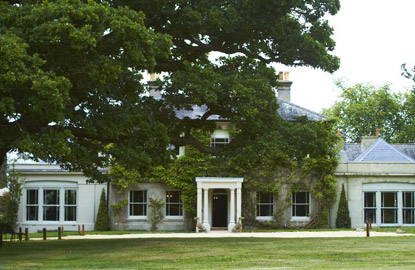 There are many hotels with restaurants but not many where you can see the lettuce that may end up in your salad the next day still growing or visit the chickens that lay your breakfast egg. But now, hotels in the UK are using produce from their own kitchen gardens faster than you can say "locally sourced". Their ranks include luxurious country house hotels The Montagu Arms and, as of this month, Lucknam Park.

But nowhere is more committed to self-sufficiency than Hampshire’s The Pig (you might almost say they’ve gone the whole hog.) At this "restaurant with rooms" on the edge of Britain’s New Forest National Park (more parkland and woods than forest), home-grown food is not an add-on but their unique selling point.

The restaurant—set in an airy glass-roofed conservatory that spills out onto a terrace overlooking lawns, with unvarnished wood tables and mismatched cutlery creating an informal gastropub atmosphere—incorporates three of the UK’s hottest culinary trends: uber-localism, seasonality, and artisanal. Consequently, the menu changes frequently according to what ingredients are available. 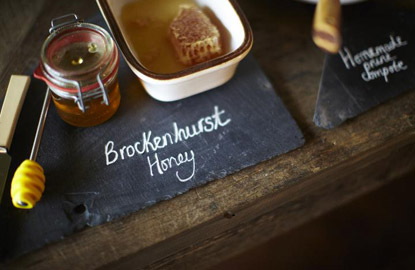 The Pig aims to source 95% of its ingredients from within 15 miles (in summer; 25 miles in winter), with the large kitchen garden providing eight different kinds of lettuce, five varieties of beets, cabbages, kale, peas, beans, and more. Guests are encouraged to visit the garden as well as the fruit cage that produces raspberries, blueberries, and kiwis. The fruit trees are still saplings but local growers provide apples, apricots, and pears for the homemade fruit compotes served at breakfast along with homemade bread and granola (plus eggs and bacon).

Foraging, as pioneered by Danish celebrity chef René Redzepi, is yet another hot foodie trend, and The Pig is all over it. Guests can accompany Garry, the hotel’s resident forager, as he scours the New Forest for wild garlic, berries, or wild mushrooms and the nearby Lymington coast for seaweed, shellfish, and gull’s eggs. More conventional excursions, like horse or bike riding in the Forest, are also available.

After all this activity, not to mention sampling the extensive wine list, the large comfortable beds and monsoon showers will beckon. Some rooms are in the 18th century main house, a former hunting lodge, while others are in a new annex built around a courtyard that boasts more tables and a wood-fired oven. Still more are in a converted stable block at the other end of an herb-lined walkway. All combine retro touches with modern electronics and bathrooms (and are stocked with small books on subjects like pig keeping or wild food). Prices start at £125 for one of the smaller Snug rooms.

The laid-back shabby chic aesthetic (down to a trompe l’oeil crackle finish on the walls) is continued in the public rooms with their comfortable sofas and armchairs, wide-planked unvarnished wood floors, and large open fireplaces. Unsurprisingly, porcine touches turn up in the décor as well as on the menu, which starts with a "piggy bits" range of appetizers, such as mini BBQ ribs and crackling with apple sauce.

Although weekend spa treatments are available in the tiny Potting Shed and there’s a tennis court, plus huge trees to sit under, this is much more a working garden than an upscale rural retreat. Fans of grow-your-own will find their stay not only relaxing but informative and inspiring. If President Obama is looking for a suitable anniversary present…

Photo credits: Courtesy of The Pig